Our stuff is packed in carton boxes and stored in two garages, the floor of our house is dug up 20 cm deep and a container is standing in the garden under the cherry tree which fruits are just about to ripen. Within two weeks our life was turned upside down when after a burst pipe we realised that it is inevitable to change the complete water system. But since we are forced to move out of the house, it would be reasonable to do all work we need and want to do and what we probably would have postponed for ages. A 80-90 years old house is an old house which fact we were aware of but we hoped that we can live with it at least as long as I can motivate myself to live from carton boxes again. Apparently the little house wants to be renewed and to start a new phase of its life. We asked a couple of experts and they all assured us that the house was very well-built around the Second World War so it is strong enough to serve us for another 100 years.
After the first shock we start to like the idea that we can make some changes in the house in the way that we preserve its values and that intangible something which link us together from the first moment. We treat it almost like a person as it had a soul and I am completely sure that it has. When the first steps of demolish starts I almost feel physical pain and have to wipe out teardrops from my eyes. Sometimes you have to destroy something to be able to build up something new. And also I have noticed in my life that every time I hesitate to take a difficult decision life pushes me forward in such a drastic way that I cannot escape.
So we face the big challenge. We take those carton boxes, we pack and wrap and rush around to get everything done for the renovation.
My kitchen tools, and props are in boxes, I am always missing something and still try to find myself in this new and temporary situation. However I cannot leave the blog without new content. So I go to our house which seems now a bit sad and pick cherries to bake cherry pie for you. This recipe is based on an old one found in a cookbook by István Váncza, which Áron bought me in an antique book shop a few years ago. At the beginning of the 20th century the Váncza company produced baking powder and vanilla sugar among many other products. Their cookbook was first published in 1925 and was republished many times since than. The book became really successful and the recipes are still commonly known and described as the so called “Váncza recipes” .
The result is a surprise but the scents are really promising while the pie is baking in the oven. The crust is as crunchy as it should be and it is perfect with the rich cherry filling that the recipe required. I am grateful that I can continue cooking and baking in my mother’s kitchen and during the nights in my dreams I am walking through the rooms of the little house. They are more spacious and comfortable than before, I can smell the scent of cakes in the air and I can hear the noise of laughter and chatter from the direction of the dining room.

Remove seeds from the cherries. Mix flour, salt and baking powder and butter so it forms fine crumbs. Add eggs, vanilla sugar and knead it well. Divide the dought into two equal parts and roll out each to 3 mm. (I used a baking tin 36×23 so I rolled out the dough to get this size) Preheat the oven to 200 °C. Line the bottom of the baking tin with baking paper, lay one sheet to the bottom, put the cherries on top, sprinkle with the mixture of the confectioner’s sugar and cinnamon and lay the second sheet on top. Pick the dough with a fork and brush with the egg yolk. Bake for 30 minutes until it gets a golden brown colour. 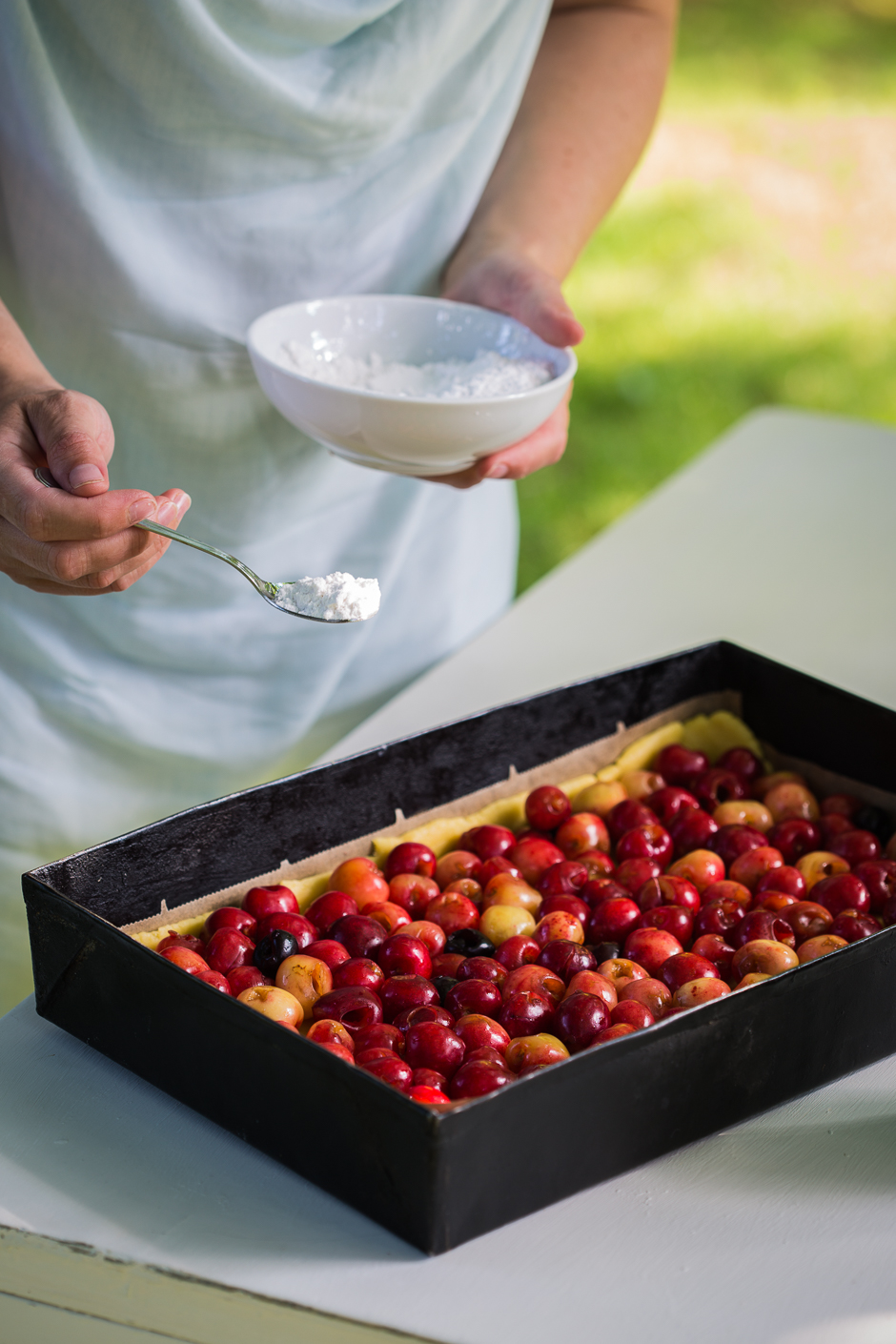 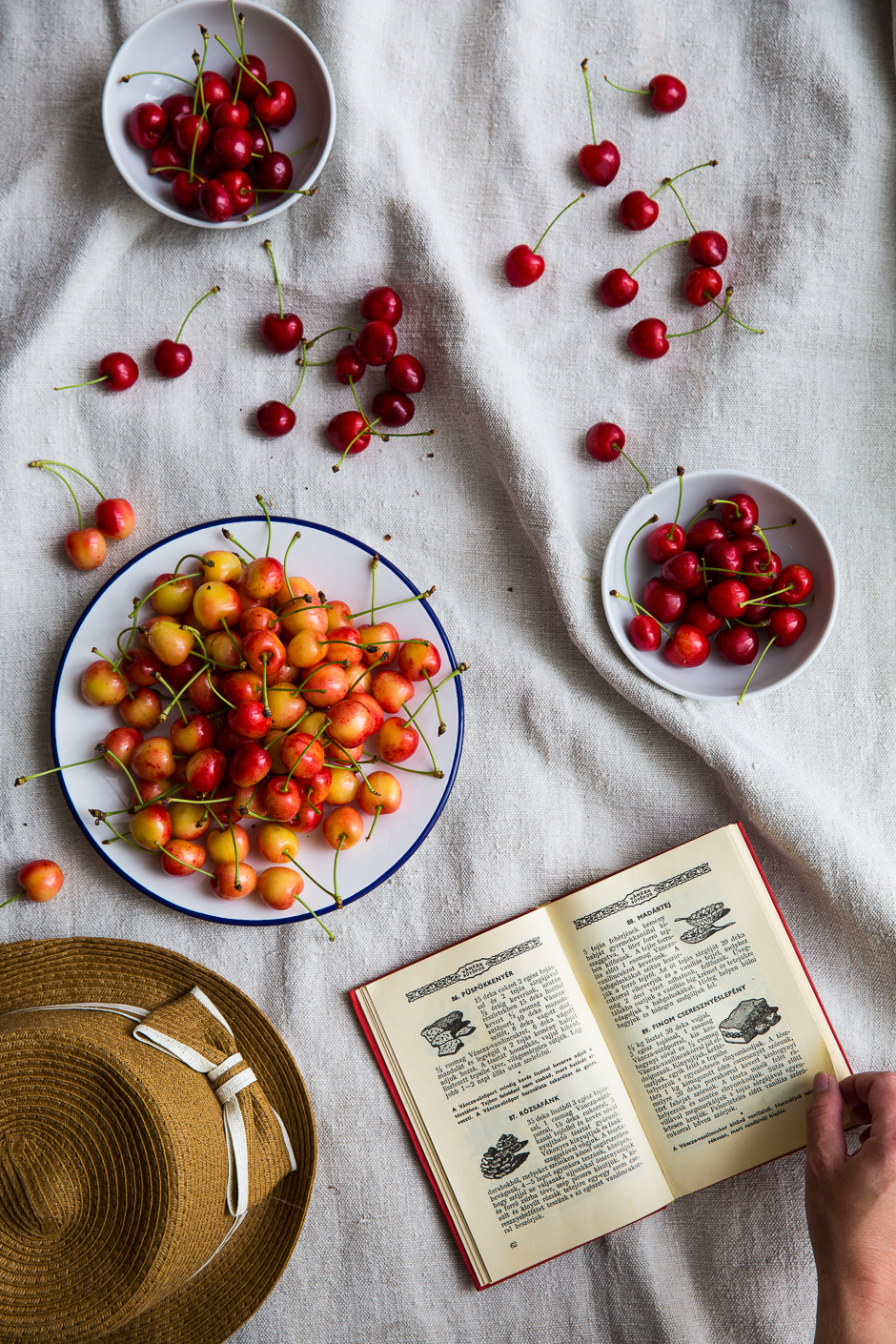 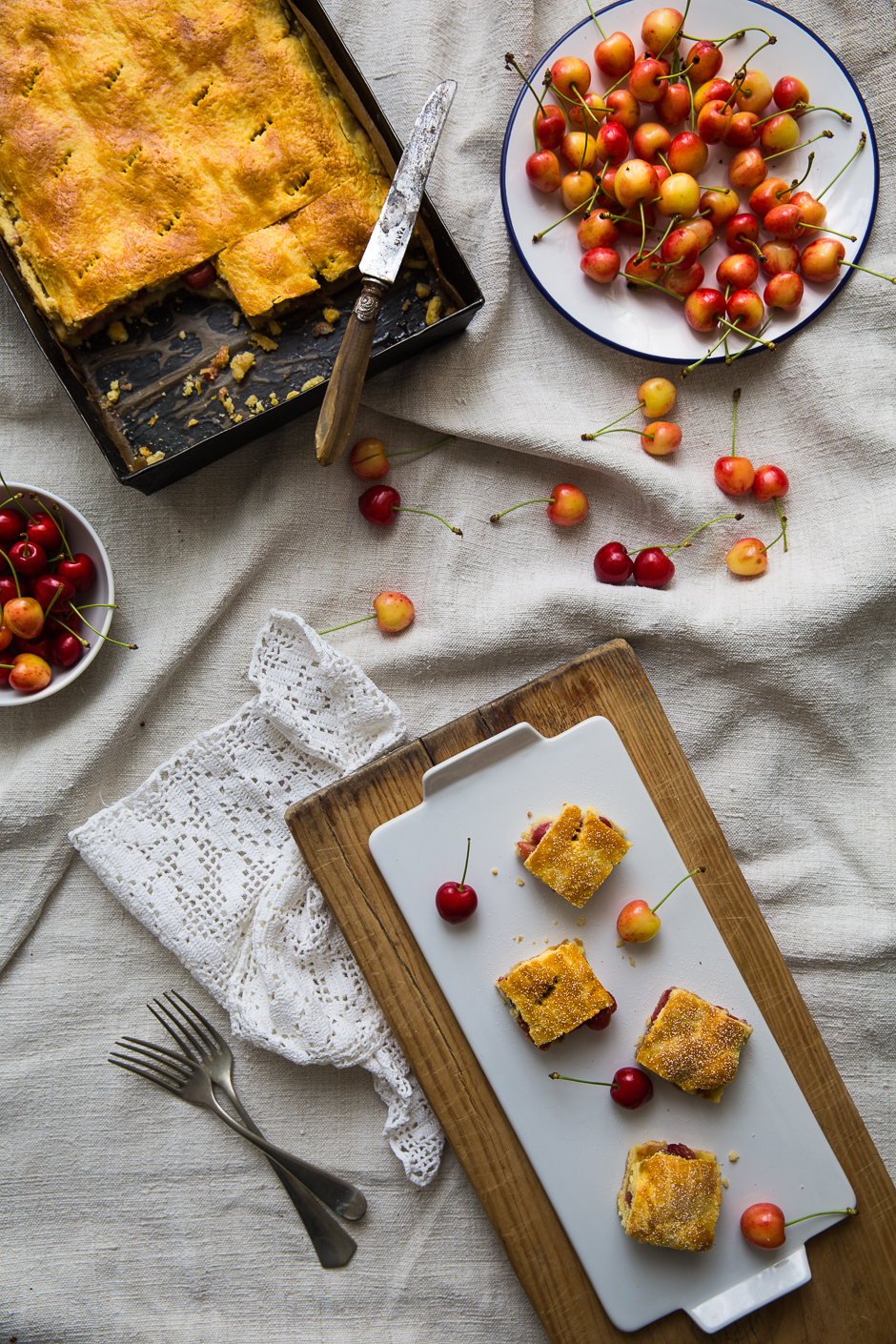 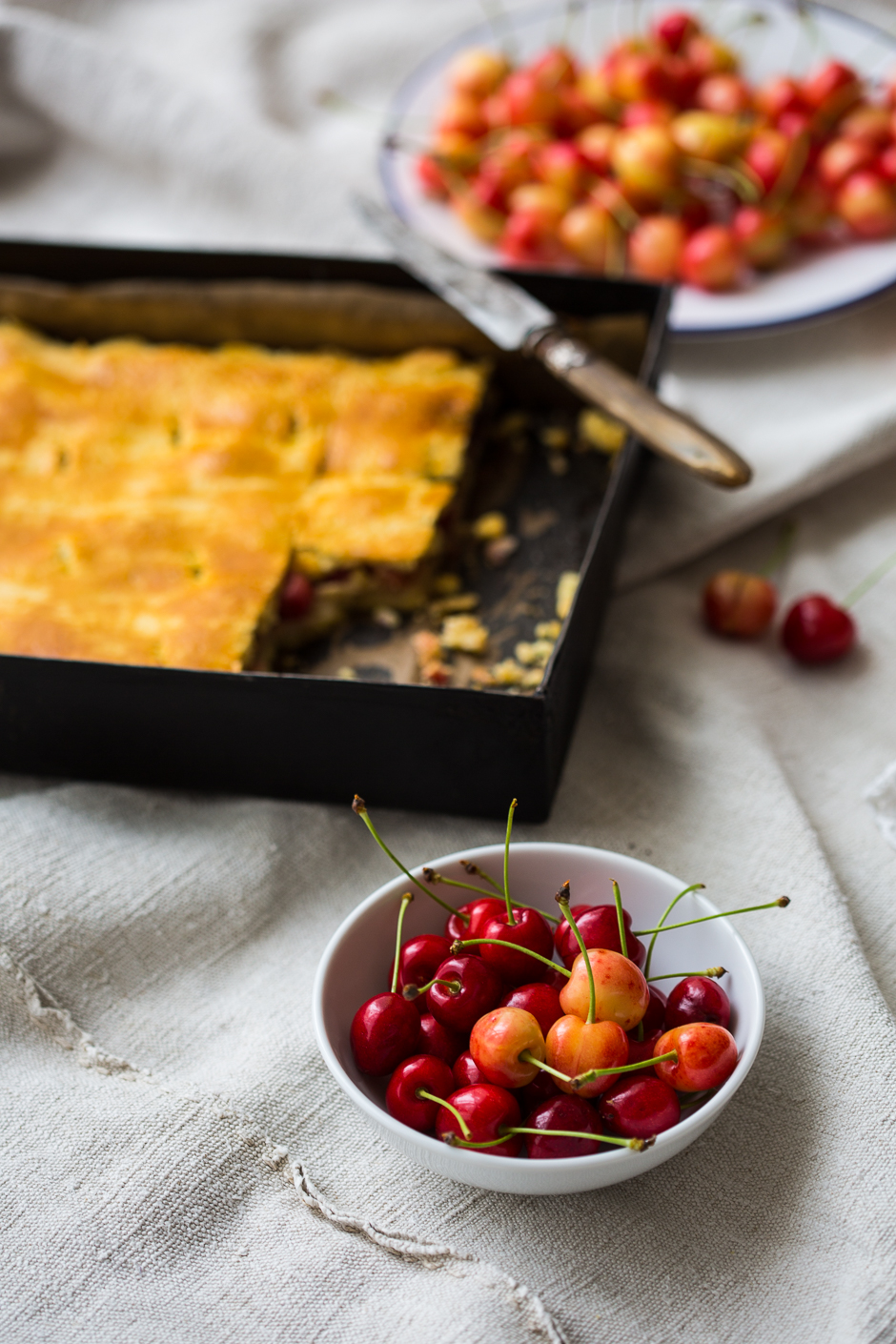 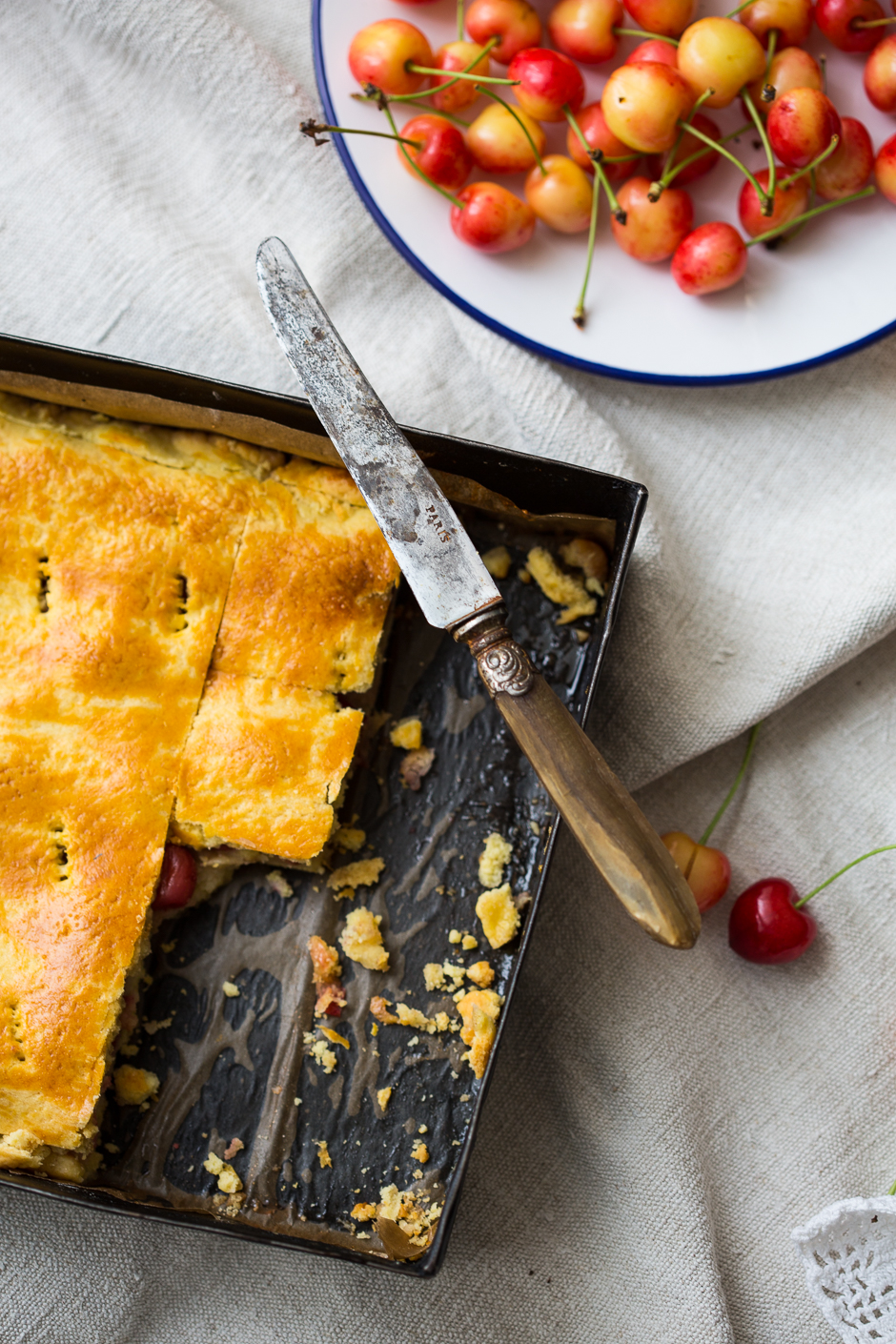