Her name was Aunt Maca (pronunciation: Matsa) I didn’t even know she is called Maria in reality because I was so used to her nickname. She was tall and thin, I would even say, skinny. She would put two bobby pins into her whitish-greyish hair which was a bit curly and her eyes were blue, exactly like my grandmother’s. She was my grandmother’s friend and our second neighbour and her garden seemed to me a real paradise. Being a small child it seemed to me huge comparing it to our yard and even its entrance door looked as if it were a door to the secret garden in Frances Hodgson Burnett’s novel. It was a large, heavy wooden door, once painted in green and it had an enamelled little plate on top, showing the number. It would be always open, although in my childhood it was not usual to keep the door open in the town. For me it was also a sign of hospitality: you are always welcome. I needed to put my weight a little bit on the handle, to be able to open it, and take a bigger step down with my little child leg, onto a stone stair which would be polished and shiny by the decades of use and hard winters we used to have in Hungary once. Oops, there I was. A narrow pathway used to lead down to the house which was separated with a fence from the orchard and the field. Walking on the pathway first I would turn left, then right and then I would continue finally straight forward.

‘Aunt Matzaaaaa’’, I used to shout until she would appear in a simple dress or a housecoat- I am sure I never saw here wearing trousers. She was quiet, introvert, with a soft voice and a big heart who loved looking after me. Maybe, because she couldn’t have her own child, she felt good being surrounded by me and I would gladly accompany her and help her in her afternoon routine. While the number of cars in town slowly increased in the 1980’s, so did the traffic in our street, but Aunt Maca’s garden would be like a little village in the middle of town. For me, as a good student who was always trying to please her parents, teachers and anybody around her, this garden was a refuge, where there was no expectations. Helping her didn’t feel like work, but joy for me. I would feed ducks and chickens and collect eggs. I would take a look at the bunnies, feed the pigs and admire Uncle Kalman’s horse and carriage from a safe distance. I would put the dried corns into the machine and listen to the noise, while it would remove the pieces from the cob. I would sit on the stool and pet cats in the kitchen while she was cooking dinner at the old fuel cooker. There would be several cats, but a white one with green eyes would be my favourite. My parents wouldn’t allow me to take her home, but Aunt Maca proposed to consider her as she had two owners, Aunt and me. So the next day, I would proudly tell my head teacher, that I have a half cat.

At the evenings, when I would go home, my mother would direct me straight to the bathroom and would peel off all of my clothes that smelled of manure and put me to the bathtub while I would tell her my adventures.

Life brought me new challenges: new school, admission exams. As years passed by, I had no time any more to go over and spend a whole afternoon with Aunt Maca. The distance between the secret garden and me grew literally and figuratively until I completely forgot about it. I became an adult. Once I heard that Uncle Kalman passed away, and a few years later Aunt Maca followed him. At that time I was travelling somewhere in the world and didn’t even know where they had been buried.

Time to time I think of her, especially now, that I have not only a half,  but a whole cat. Despite of the fact that she is not white she is still beautiful, and even if I couldn’t convince my boyfriend Áron to have other animals (yet?) but finally I have my very own secret garden.

I spend an afternoon with my Dad, we talk about old things, memories, my grandmother and the house where I grew up. I tell him sadly, that I feel so sorry, that I don’t even know what Aunt Maca’s name was.

My father looks at me surprised.

‘What? She was called exactly as my grandmother? Same surname, same first name? And they lived in the same street!?’

I shake my head in amazement and shuddered. I have a strong feeling that I need to find their grave. I have to get know more about her, I owe her… It takes me a few phone calls to figure out where they have been buried. I ask people in our village, hoping that somebody will remember her or suddenly an old photograph will be found in an attic. I have the impression that my grandmother would be happy if she knew that I do not only keep her memory alive, but her friend’s as well.

‘Only those ones die, who will be forgotten.’ – this stands engraved on my grandparent’s gravestone.

A memory, a recipe.

I find a potato bread recipe in an old cookbook from 1934, from which I try to create one which is easy to follow for a home-cook despite of the let’s say generous description which was usual at that time. (Everybody knew how to bake and cook, so there was no need to give exact amounts or detailed instructions) I presume Mrs. Sandor Hevesi baked bread in a wood cook stove so in order to imitate the same effect, I use Chad Robertson’s method (Tartine Bakery, SF) and bake bread in a Dutch oven. Instead of brushing the top with water- as the original recipe recommends- I dust it with flour and make a cut. I add a teaspoon of caraways seeds to the dough, and I found the right amount by chance- its flavour is recognisable but not too dominant. According to the author, it is the tastiest kind of bread, and I completely agree with her. I cook a courgette cream soup inspired by a French recipe in order to pair it with the bread, and flavour it with wild garlic. So there will be something old and something new on the table, while memories of an almost forgotten secret garden are perceptibly swirling in the air. 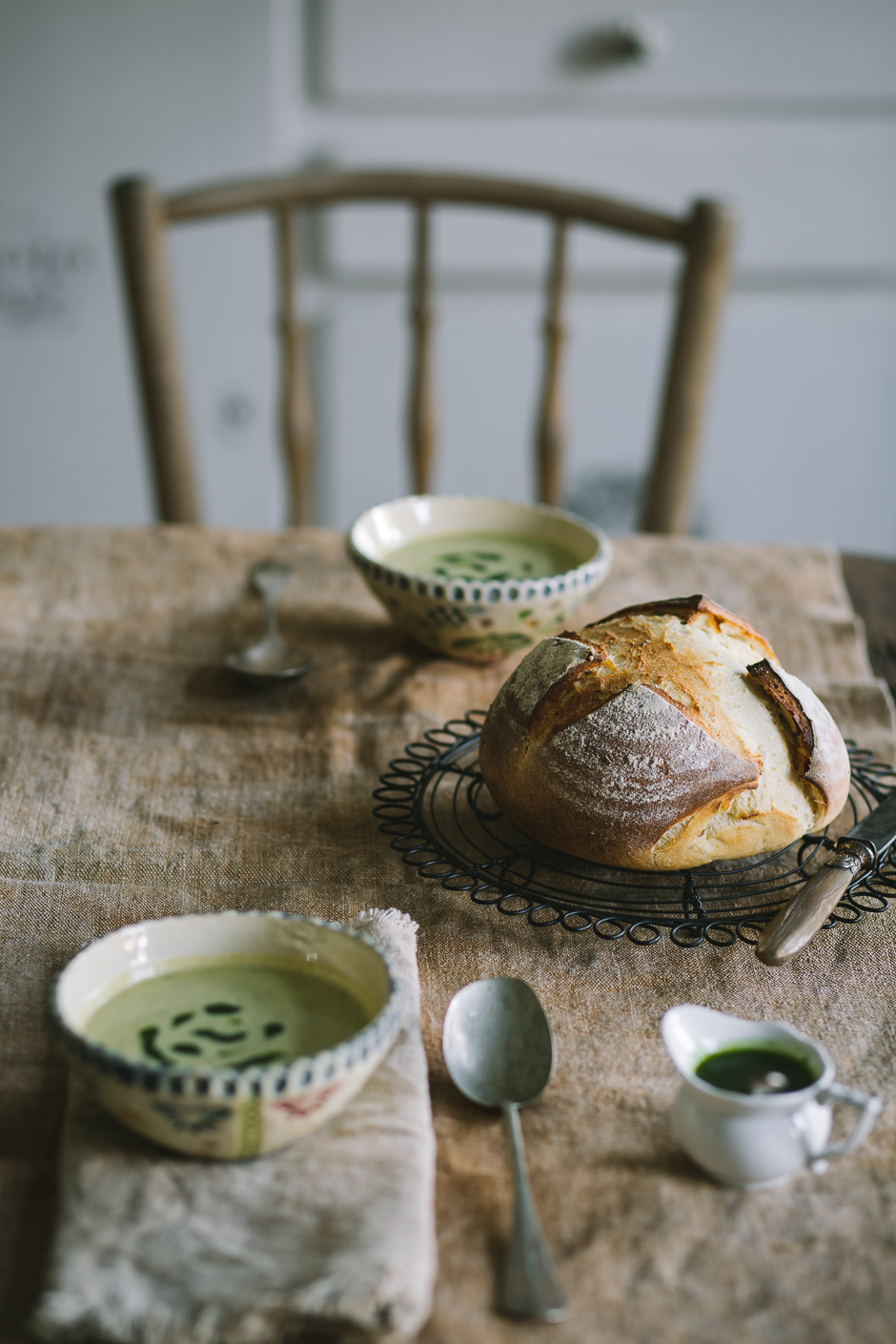 Dice courgette, shop wild garlic. Heat up some olive oil in a pot  and sauté courgette and wild garlic until they get some colour. Add vegetable stock or water, season with salt and pepper. Bring to boil the reduce heat and continue cooking covered for further 7 minutes. Puree it with a hand blender, add parmesan and cream and bring to boil again, then immediately remove it from heat. Serve it with a few drops of wild garlic oil. ( Wild garlic, olive oil, and little bit of salt, blended)

500 g cooked potatoes, crushed when still warm, then cooled down

Dissolve sugar and yeast in 50 ml lukewarm milk and let it rise. Sift flour, add salt, caraway seeds then the yeasted milk, butter, crushed potatoes, and the rest of the milk. Knead it until you get a flexible and soft dough. Put the dough into a lightly greased bowl, and cover it with a kitchen towel. Let it rest for 1 hour. Knead it on a lightly floured wooden board and divide into 2 pieces. Form two round loaves and let it rise in a lightly floured proofing basket or a big bowl lined with kitchen towel and dusted with flour. Let it rest for 1 more hour. According to the original recipe, loaves should be baked on a lighthly greased baking sheet. Instead, I baked them in a Dutch oven, following Chad Robertson’s instructions. Preheat the oven to 250 °C (with fan) Put Dutch oven immediately inside, so it can warm up. Dust the bottom with some flour, put the loaf into the Dutch oven, cover it and put it into the oven. Reduce heat to 220ºC and bake for 12 minutes. Remove the lid and bake for further 12 minutes. To bake the second loaf, increase heat again to 250ºC with the Dutch oven inside, for 10 minutes. Then bake the second loaf the same way as the first one. Let the loaves cool down on a wire rack. 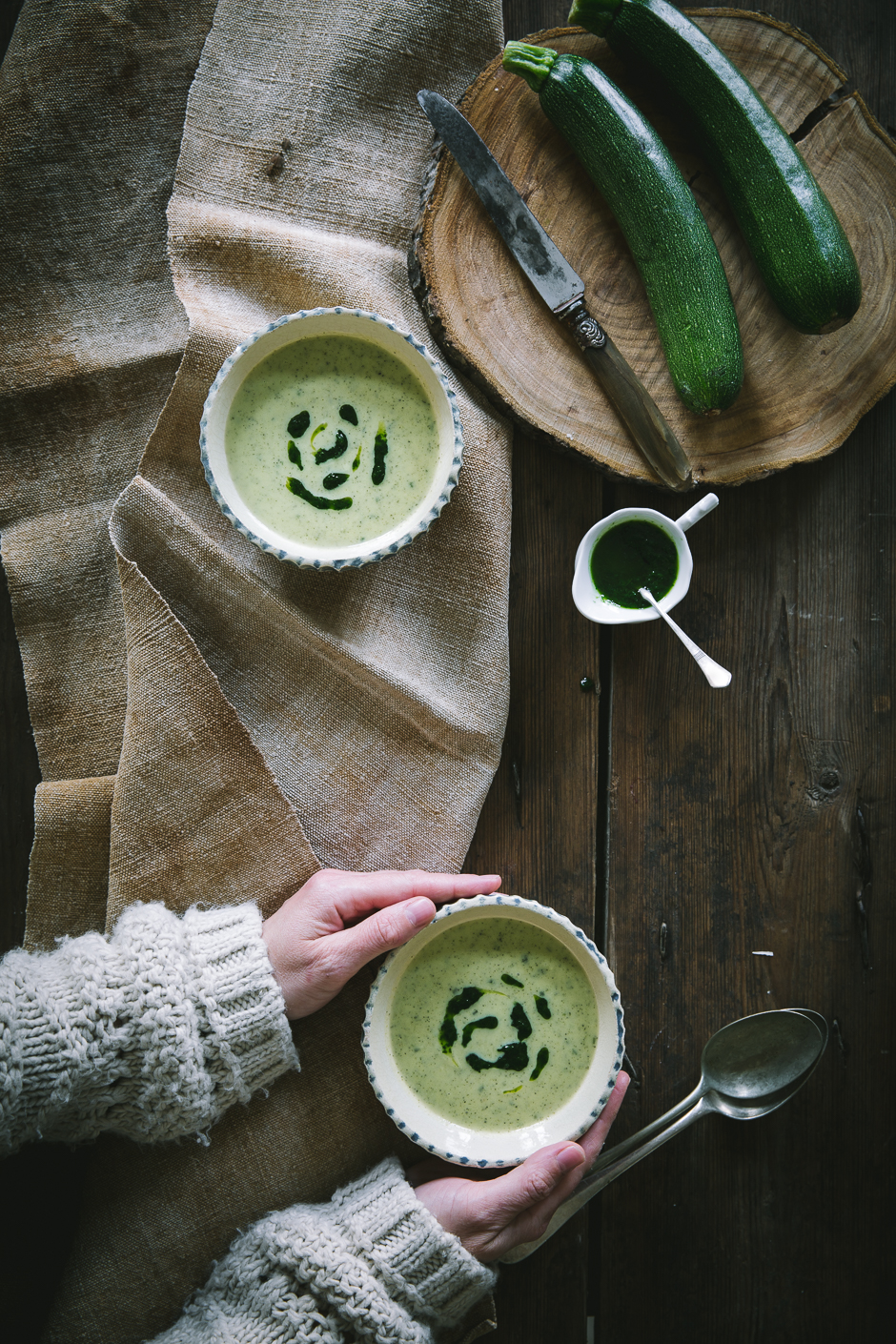 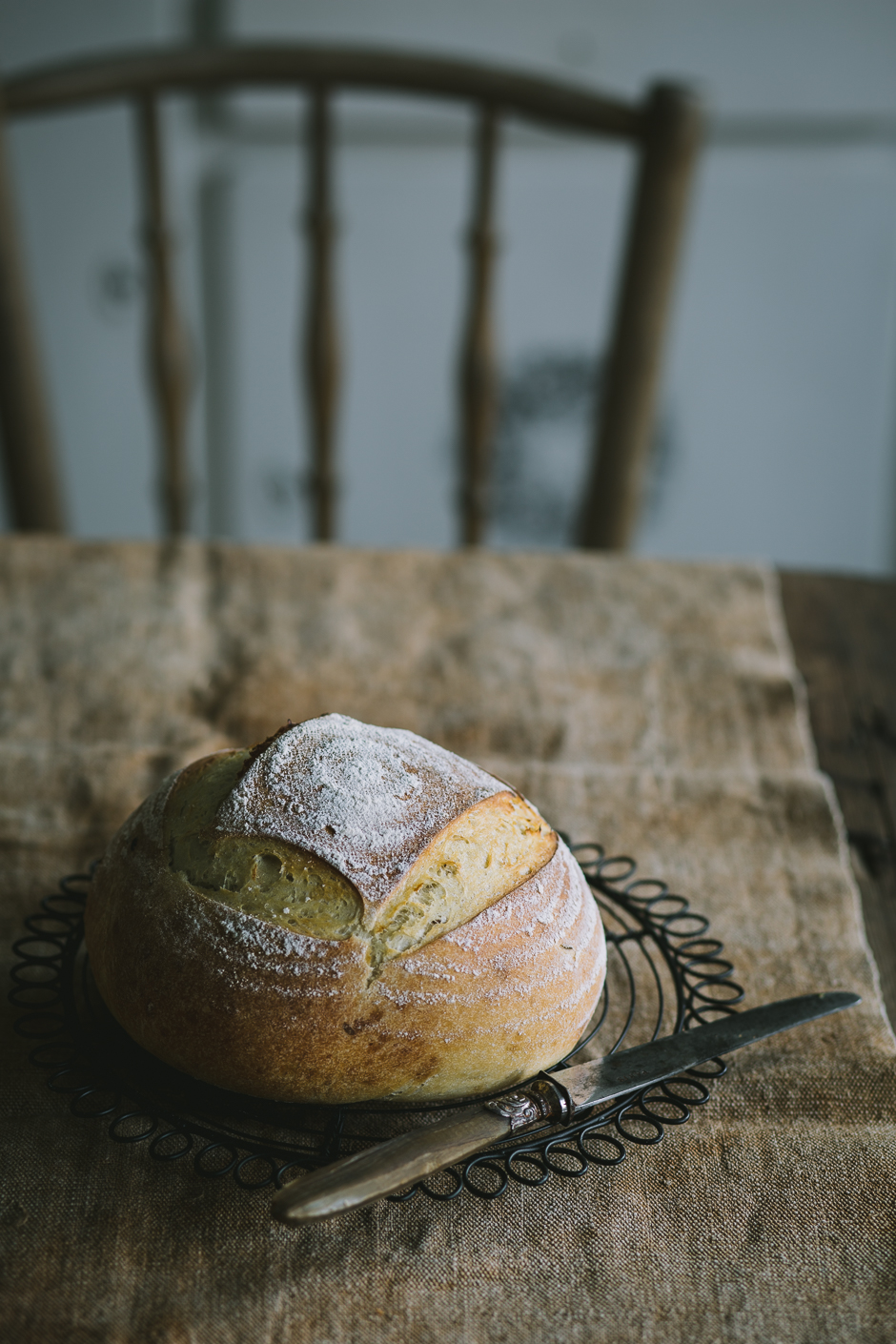 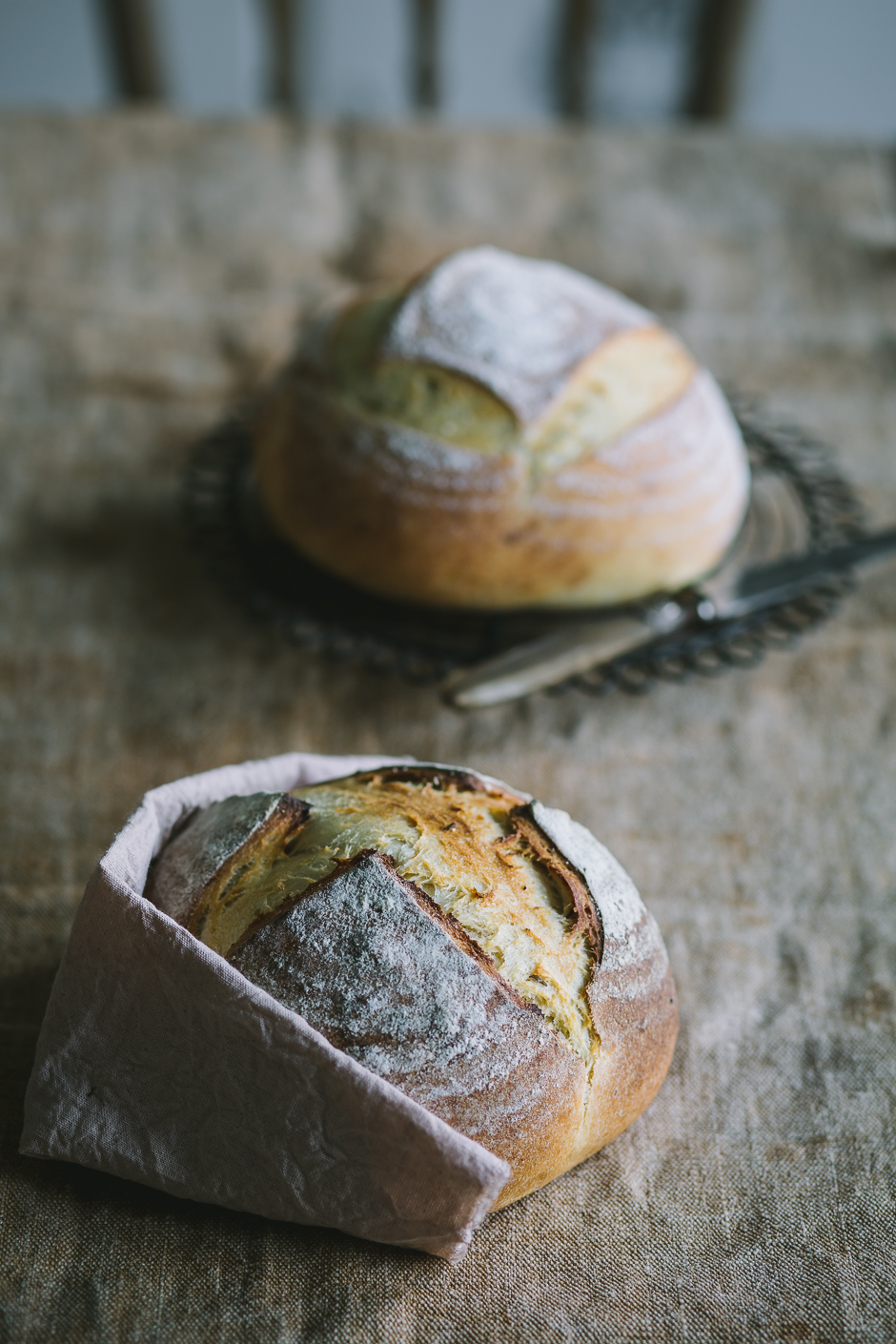 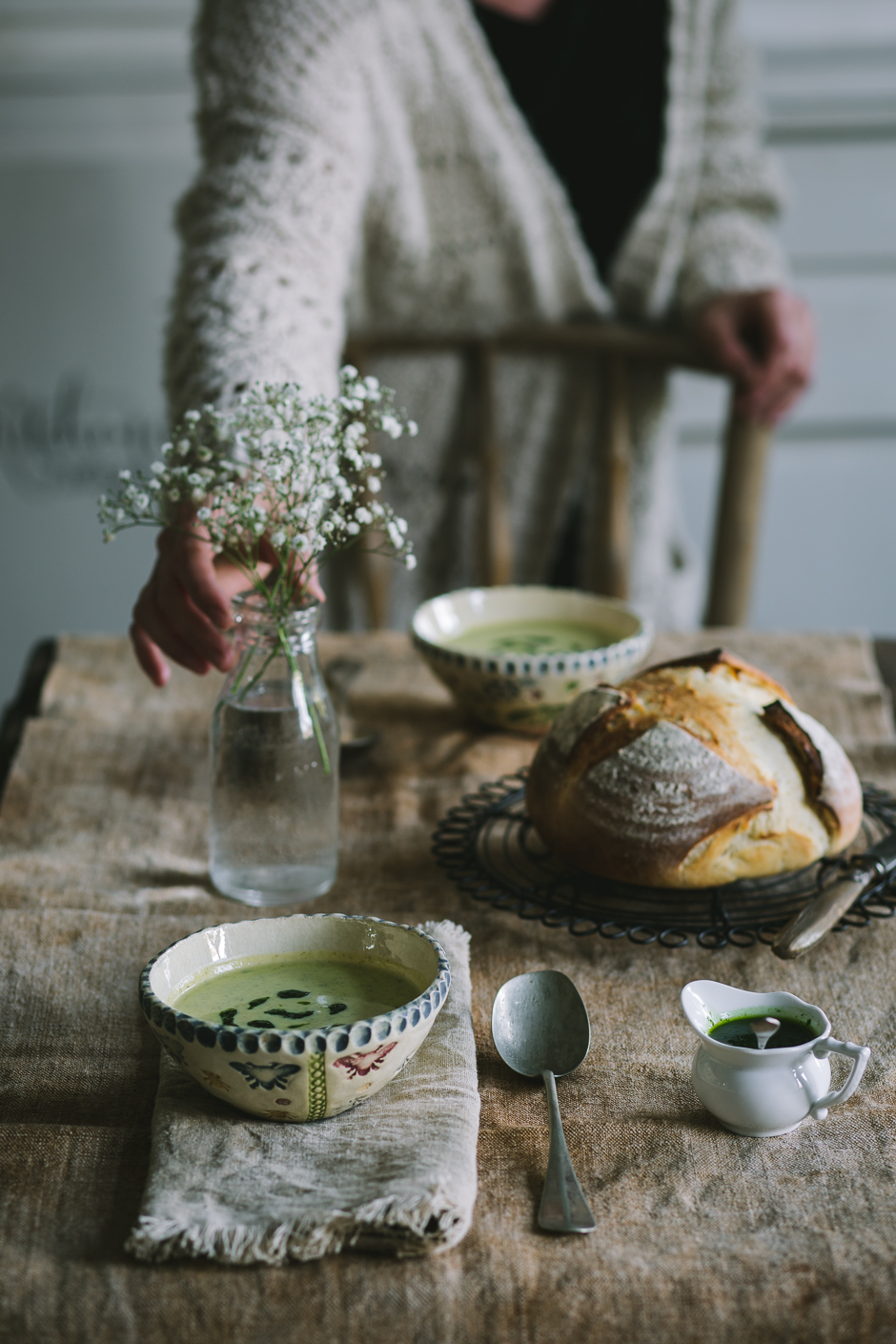 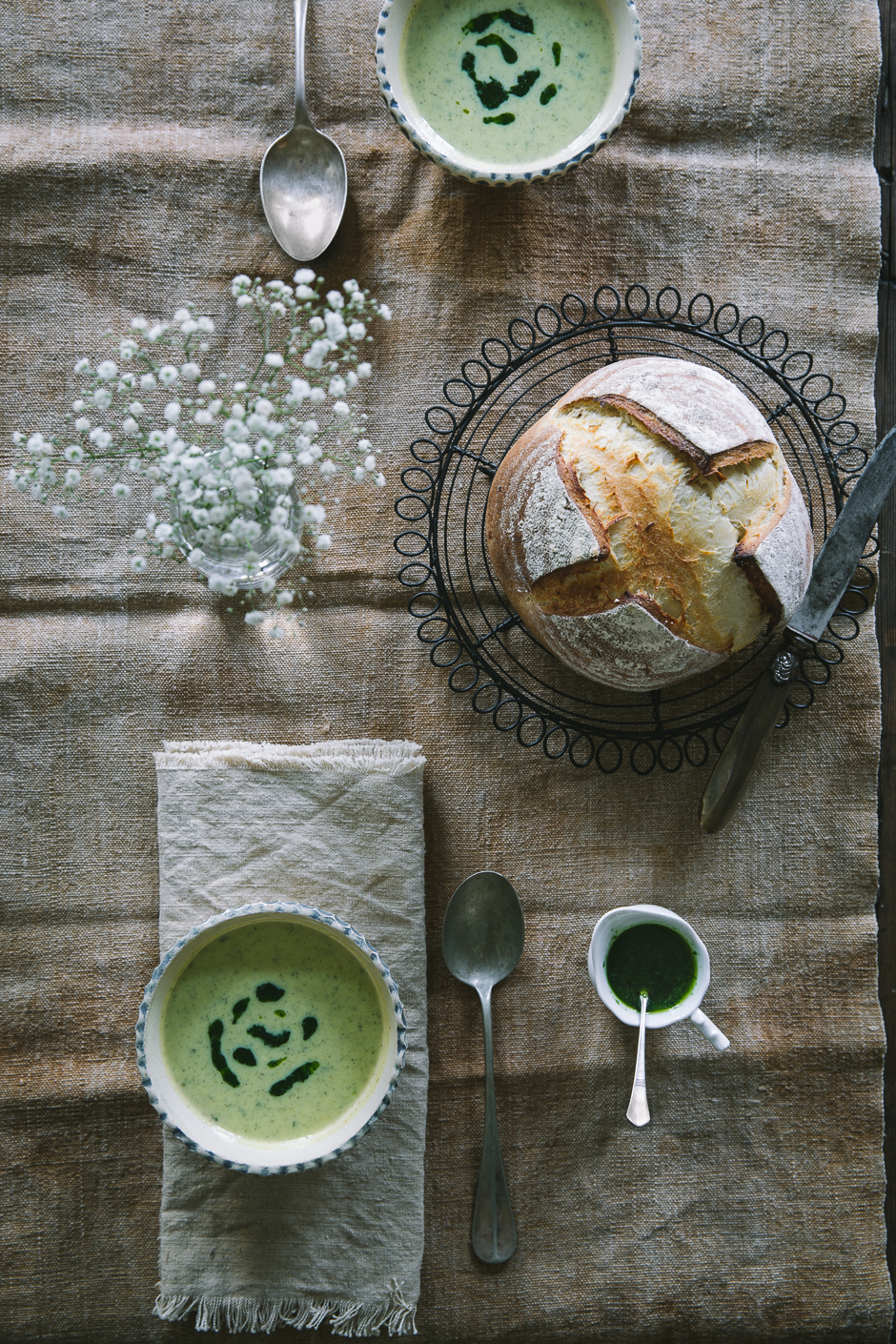 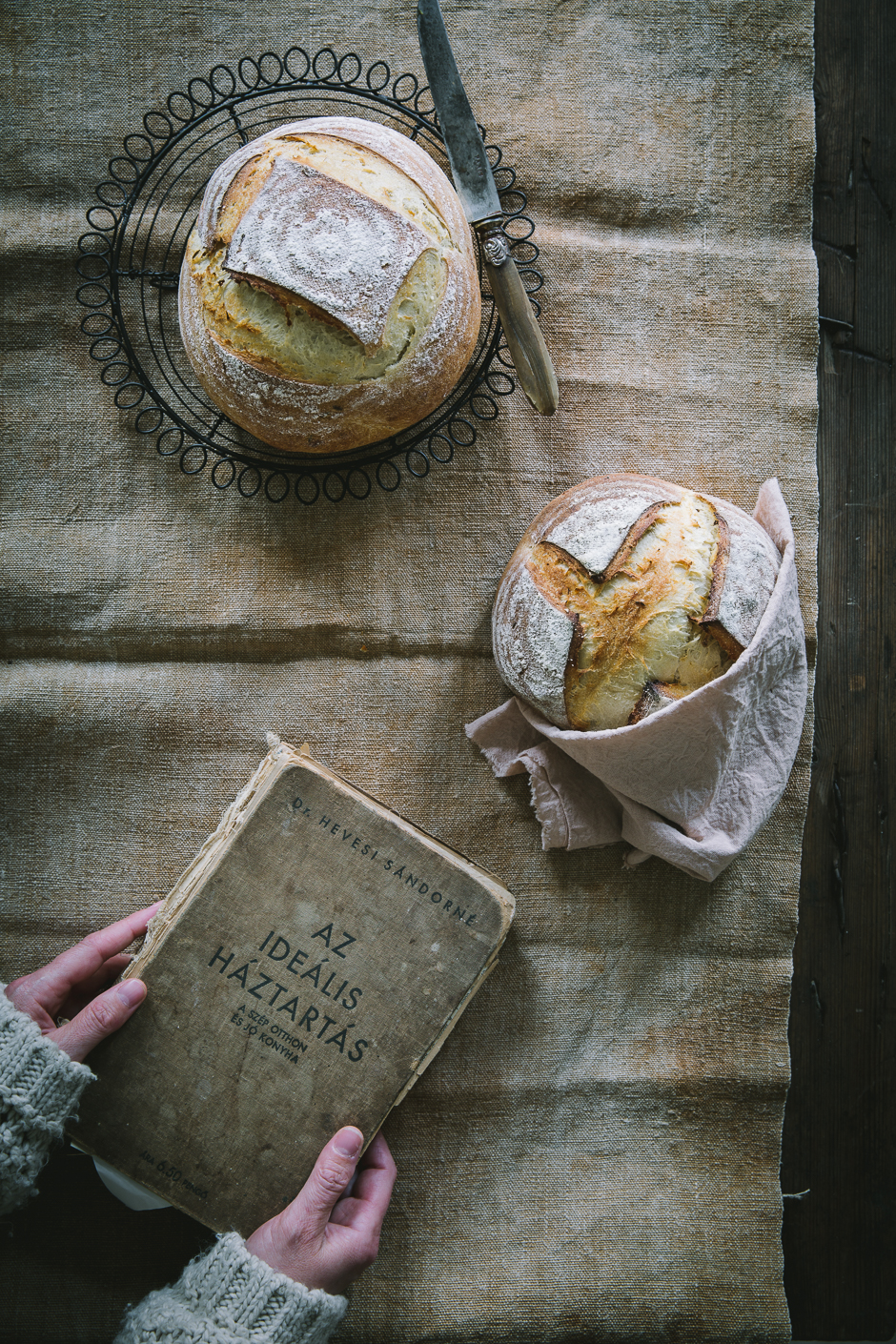 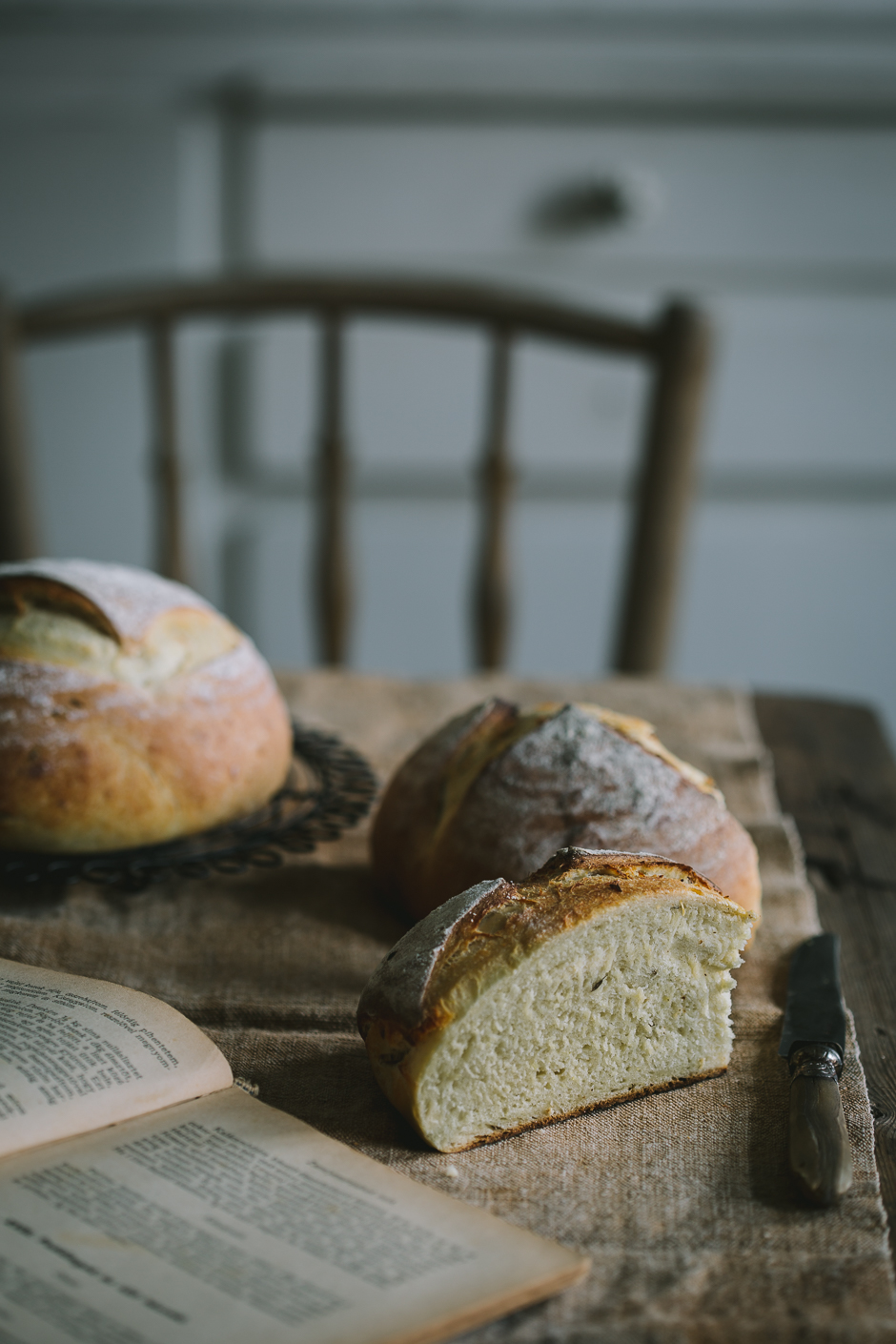 A volcano tour and potato ‘lángos’ filled with cheese