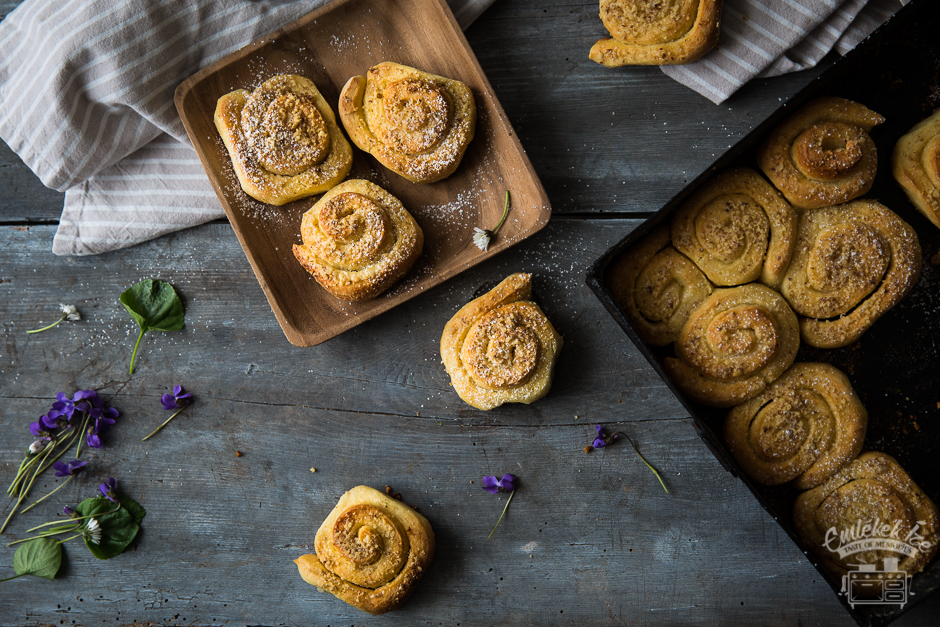 I simply cannot get enough from spring. Sometimes I am wondering how I was able to live in big cities for 18 years and basically almost ignore what transformation takes place around me each year. ‘Does it goes like this every year? Amazing!’, I would happily tell everybody who passes by the house but I stop myself. Obviously this is natural for everybody except me. I came to the point when I realise that for too long time I was busy with unimportant things that once seemed so important so it was high time to turn to all those apparently insignificant ones which are much more valuable than I thought before.
Transformation in nature goes really fast. One day there is nothing, lawn is yellow and dry, trees stand sadly and baldly the cold winter wind, and wind whirls up fallen leaves in the flower bed. Then one day magically tulips and daffodil leaves creep out and violet and daisy appear from nothing. Since it is a real village garden and not a well-designed English one, it is always a surprise what plant and where will show up. I would prefer spending the whole day outside. I find great pleasure in hoeing the kitchen garden- which Áron dug a week before- and I sow carrot, radish and green peas seeds while murmuring wishes for good harvest.
András, a young gardener from the village is looking after pruning our fruit trees this year as well. I try to convince him with big enthusiasm that he should also look after those really old trees that suffered the most of the long time abandonment. We take a look at them: the abstractly grown plum tree, the apricot which won the prize for second highest apricot tree in the village and the cherry which lost a big branch last year on a windy day.
‘I don’t know’, says András looking at the giant trees, and I act like the tree’s lawyer pointing out their strength, the good harvest we had last year despite the fact that they have such big holes on the trunk that I can put my hand into it. ‘You see how persistent they are, how much they want to live?!”- I add when finally András starts smiling I think partly because of my great – and maybe not really reasonable – enthusiasm for old trees and agrees to do his best to help them.
Time has come that we were waiting for so long: our little old house gets new windows. We wanted to preserve the old ones, but they were in worse shape than we expected. It was a fight to open and close them, were damaged partly by bark beetles, partly by heavy rains and snow in the last 80 years and pieces of wood and paint were falling every time I tried to clean them.
We preserve the old shape, the window pine divided to three parts the reason why our house looks like a gingerbread house and the wooden wave ornament the carpenter decorated the casement. We only changed the colour: instead of painting them white we want to see the beauty of natural wood. So far only a few windows were have been built in but it is already a pleasure to look at the house. It looks so youngish and seems to me even to pull itself proudly saying: ‘Look at me, how pretty I am! I am not a youngster any more, but they love me and look after me so I feel great!’
During works I go to our summer kitchen and try another recipe from the old handwritten recipe notebook my form tutor gave to me. It is called “darázsfészek”, which means wasp nest. It is a light and fluffy yeasted dough with walnuts and vanilla. These rolls come out of the oven with such a wonderful scent that I have to practise self-control in order to NOT to grab for one piece before I take a picture of the freshly baked rolls in the baking pan. I was strong as you can see and stopped myself. But only for those 10 minutes…

Remarks, opinions:
Áron, my boyfriend thinks it could go well with a vanilla custard. My grandmother would add same grated lemon zest to the dough, would cut bigger pieces to get higher rolls, and put them tight next to each other without leaving space in between after brushing the sides with melted butter. But we all agree in one thing: darázsfészek according to Ica’s grandmother recipe is amazingly good as it is.

Mix flour, salt and confectioner’s sugar. You can dissolve yeast in milk with a little bit of sugar, but since there was no indication for that in the old recipe, I decided to add it crumbled directly to the flour together with milk and egg yolks. Although the recipe didn’t mention neither I let the dough resting for 45 minutes and I suggest you to do so. Beat butter with sugar until it is fluffy. Roll dough out after resting time to half centimetre then brush it with the butter, roll it up and cut 15-16 pieces of the roll. (ca. 2.5 cm each) Place the rolls on a lightly greased and floured baking pan and leave 2 cm space between them. Sprinkle the top with the mixture of walnut and caster sugar. Preheat the oven to 180 °C. Leave the rolls resting for half an hour, than bake them until they start getting color. Warm up milk and dissolve sugar. Pour the mixture over the half-baked rolls and put the pan back to the oven and bake them until they are golden brown. 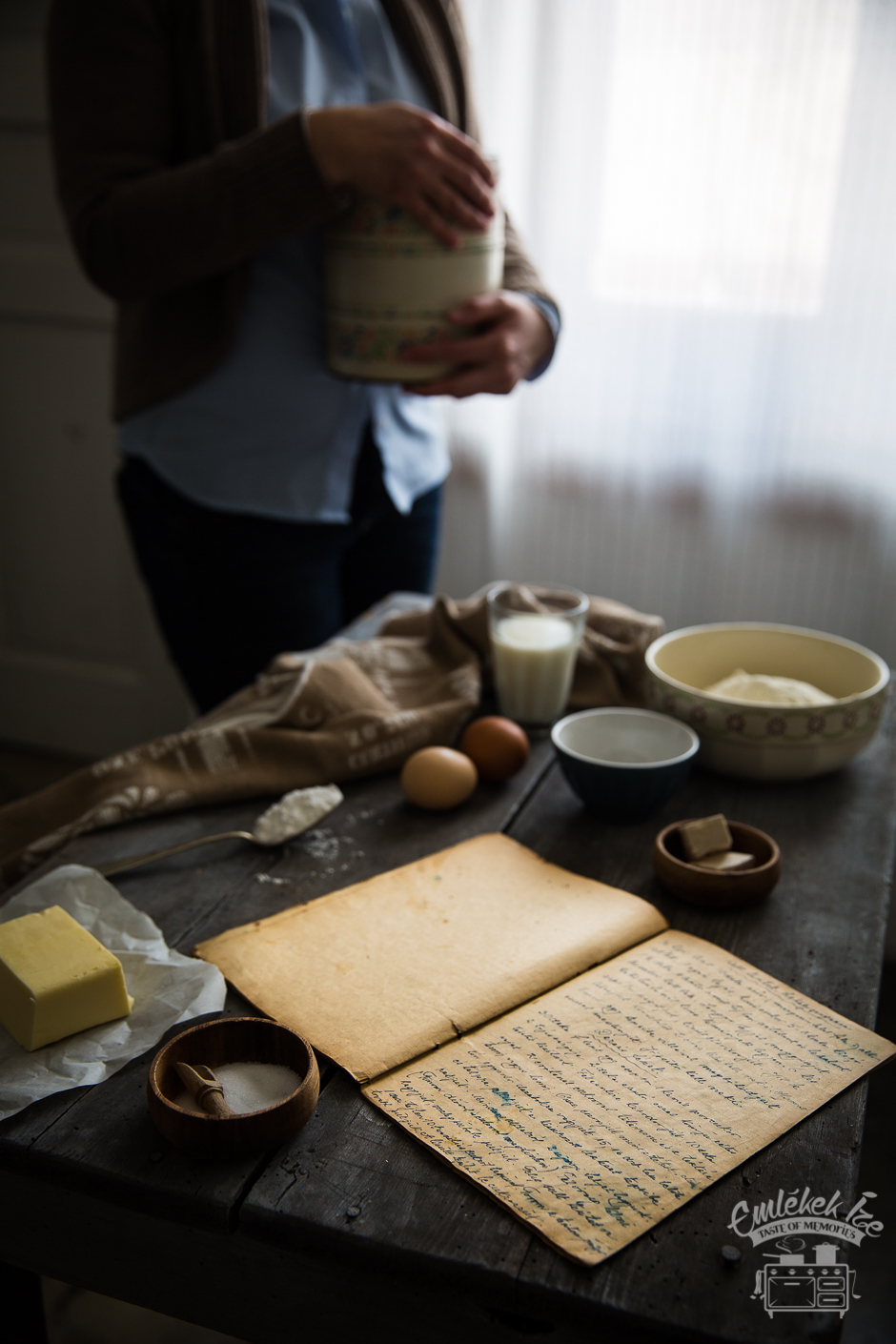 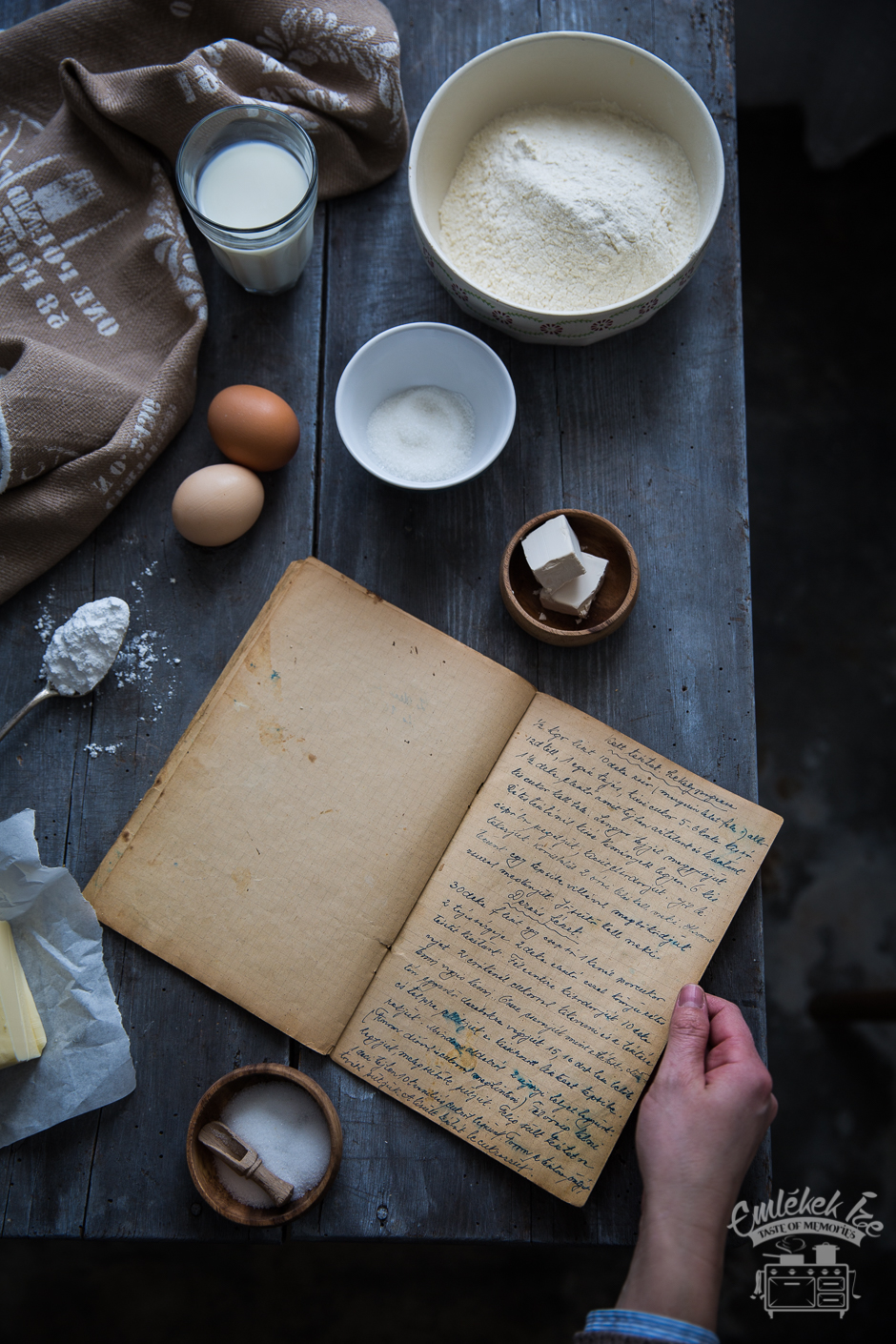 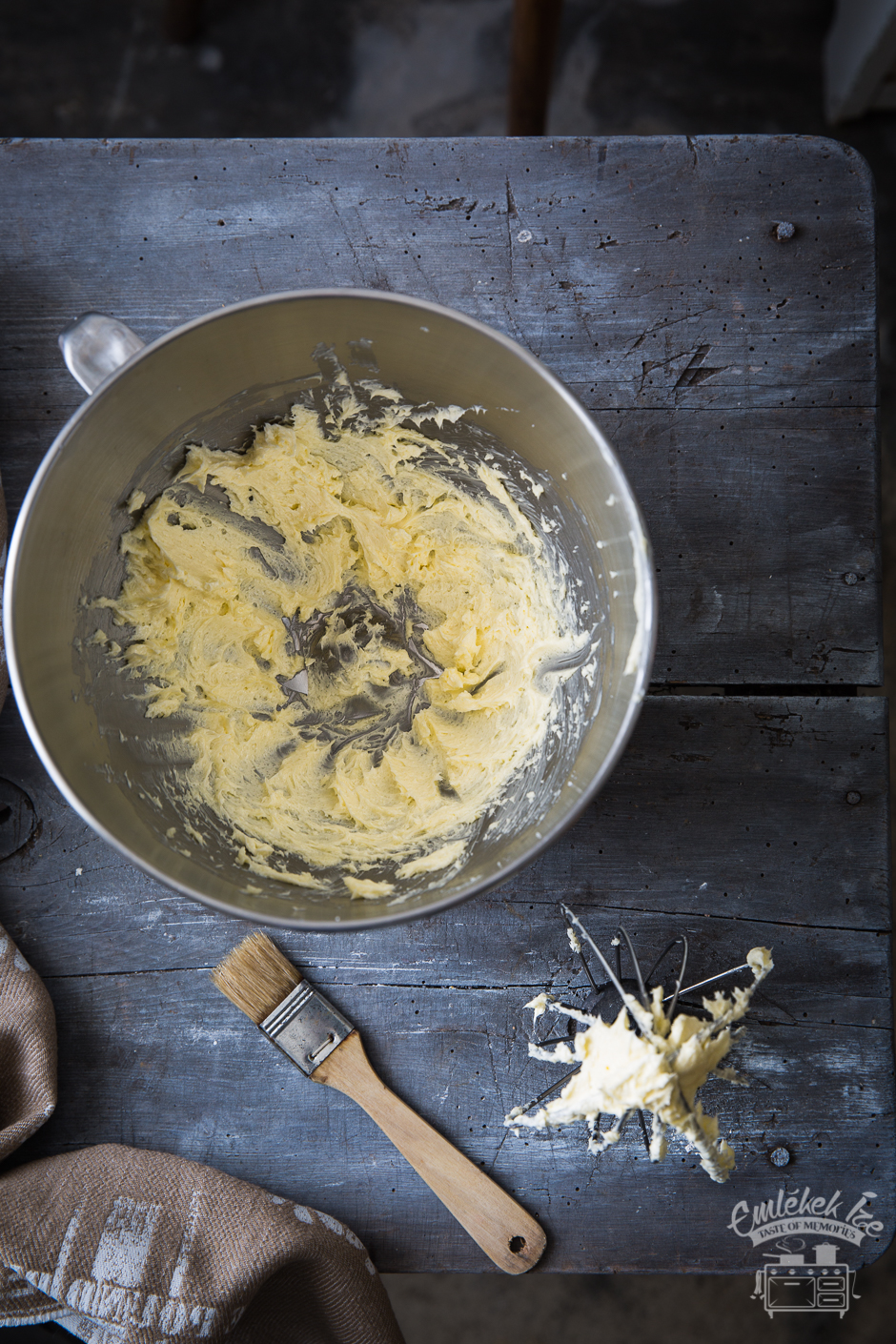 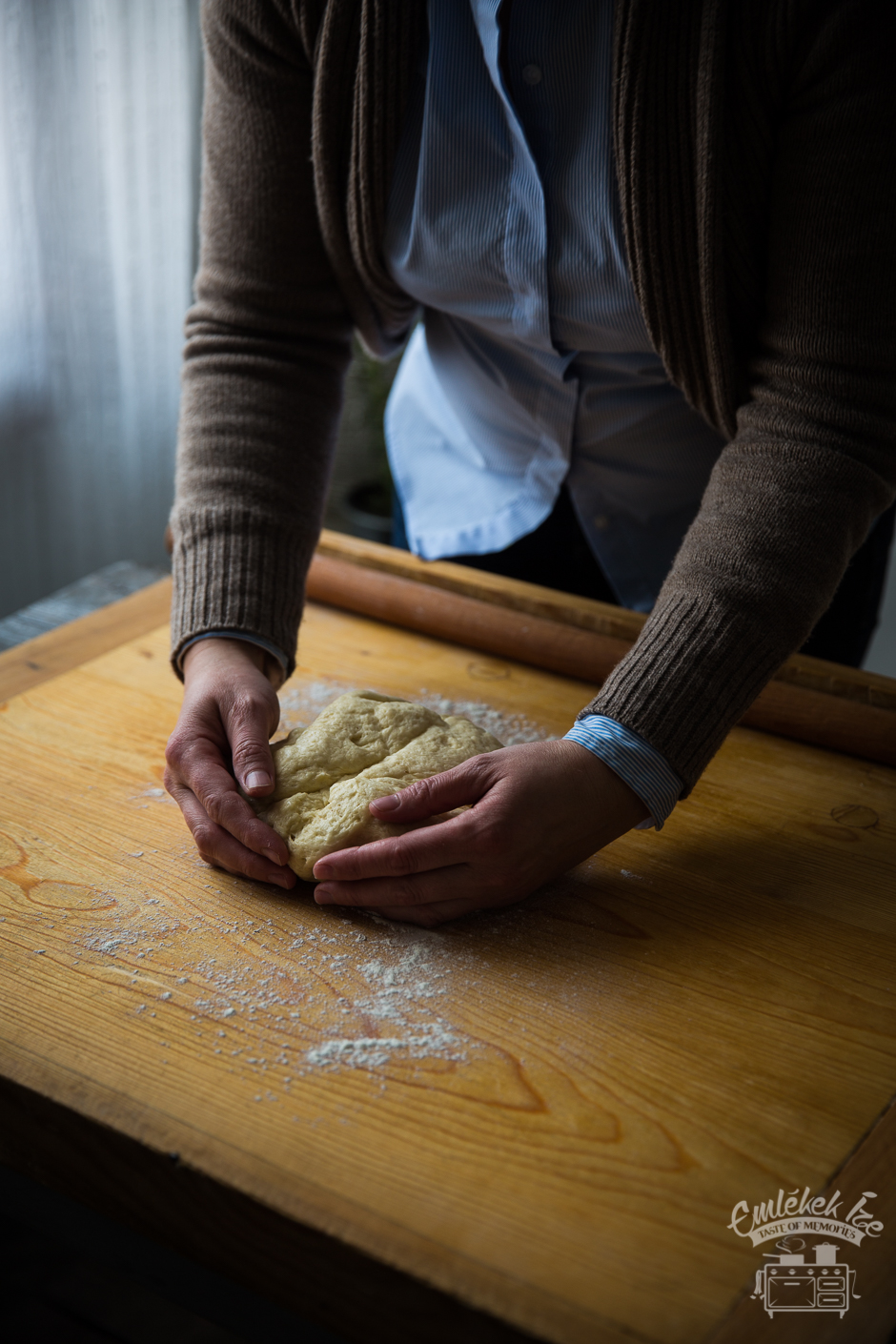 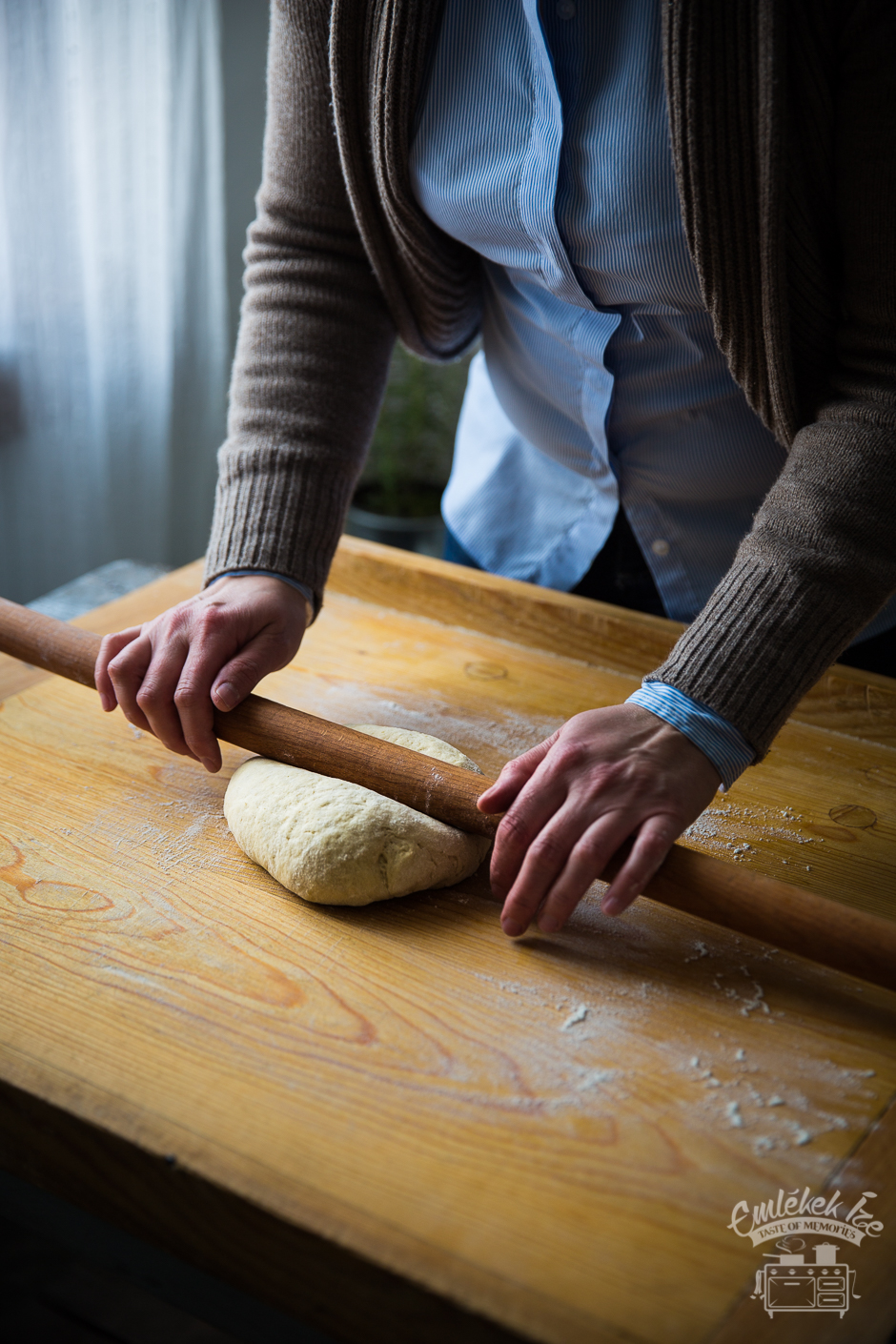 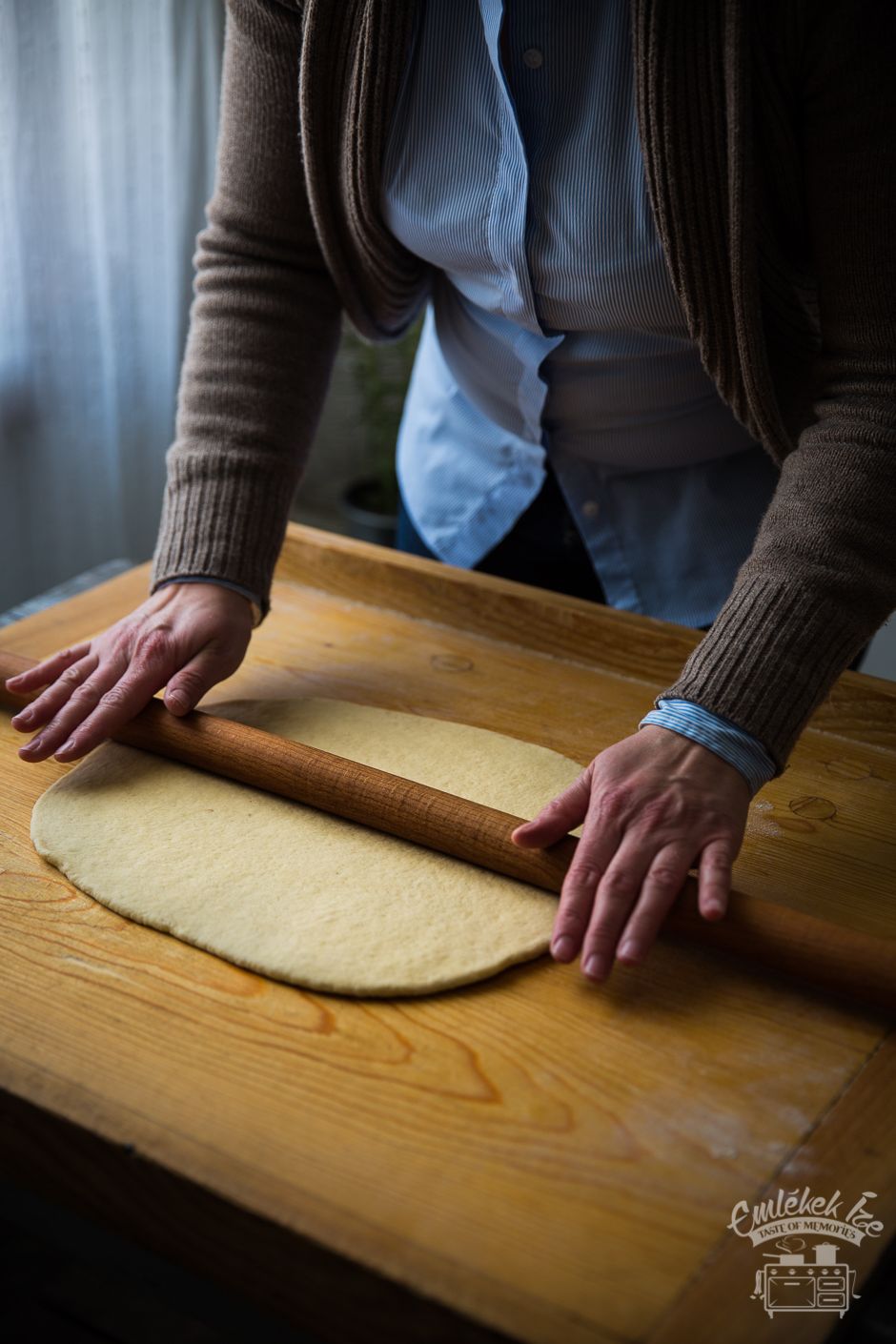 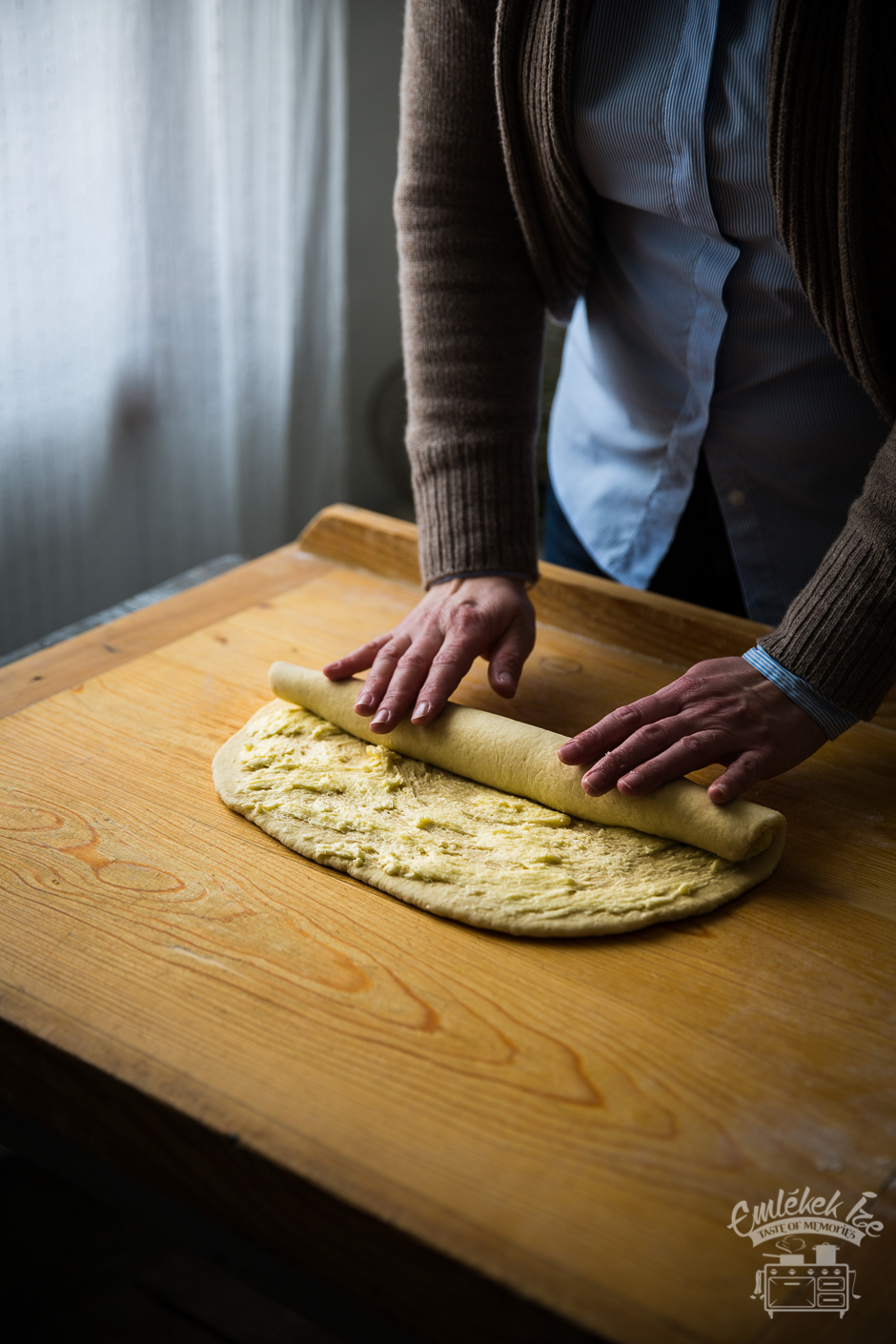 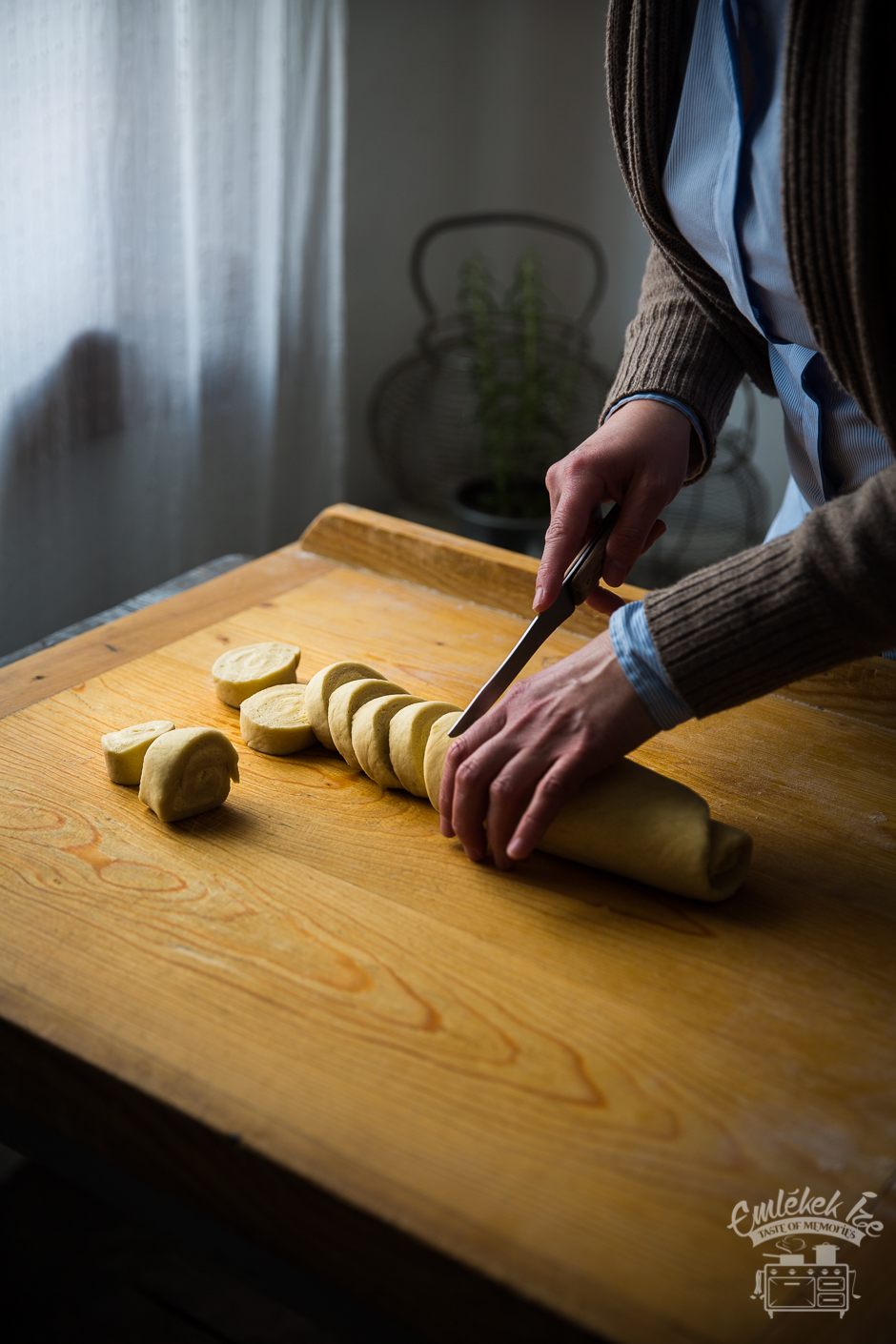 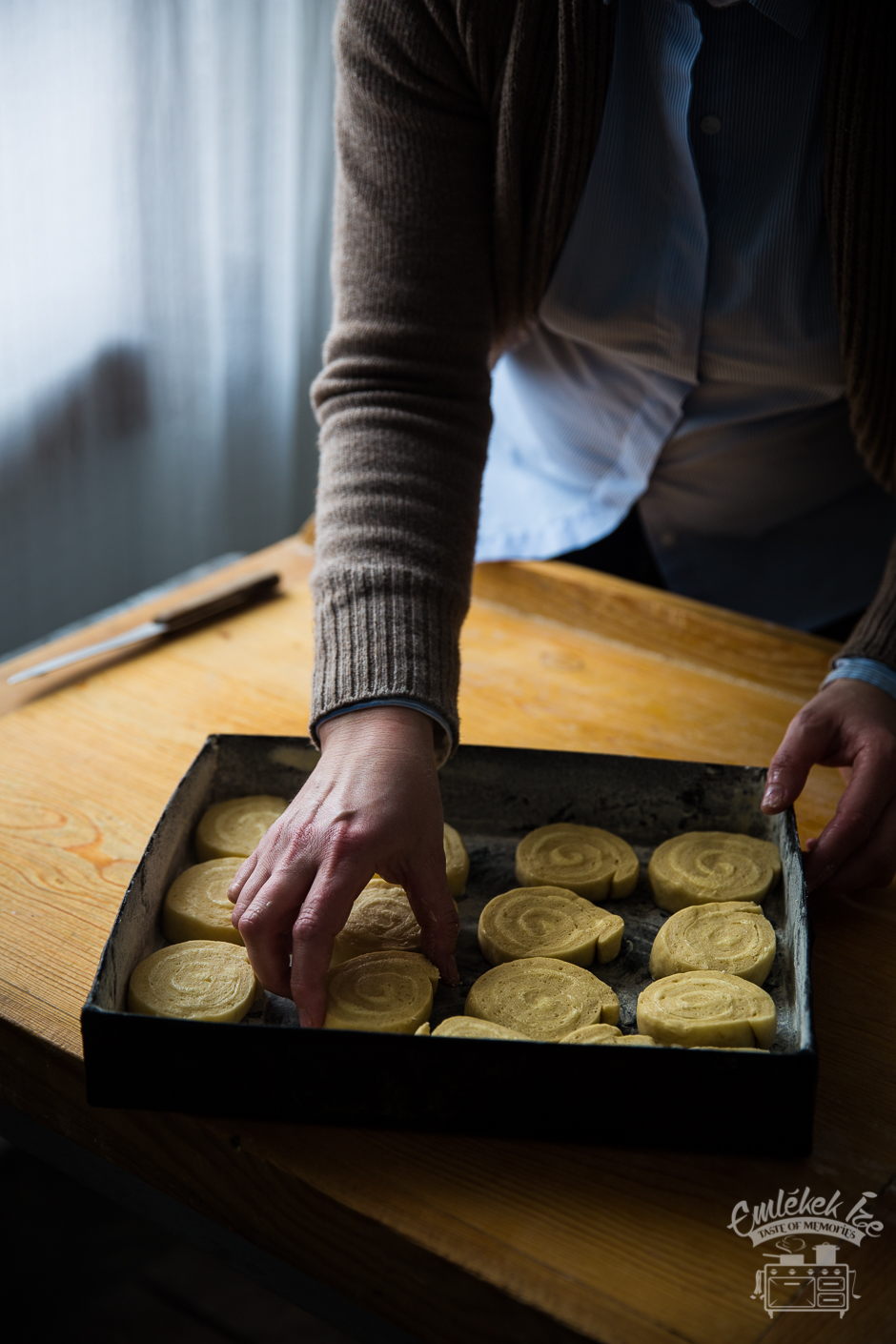 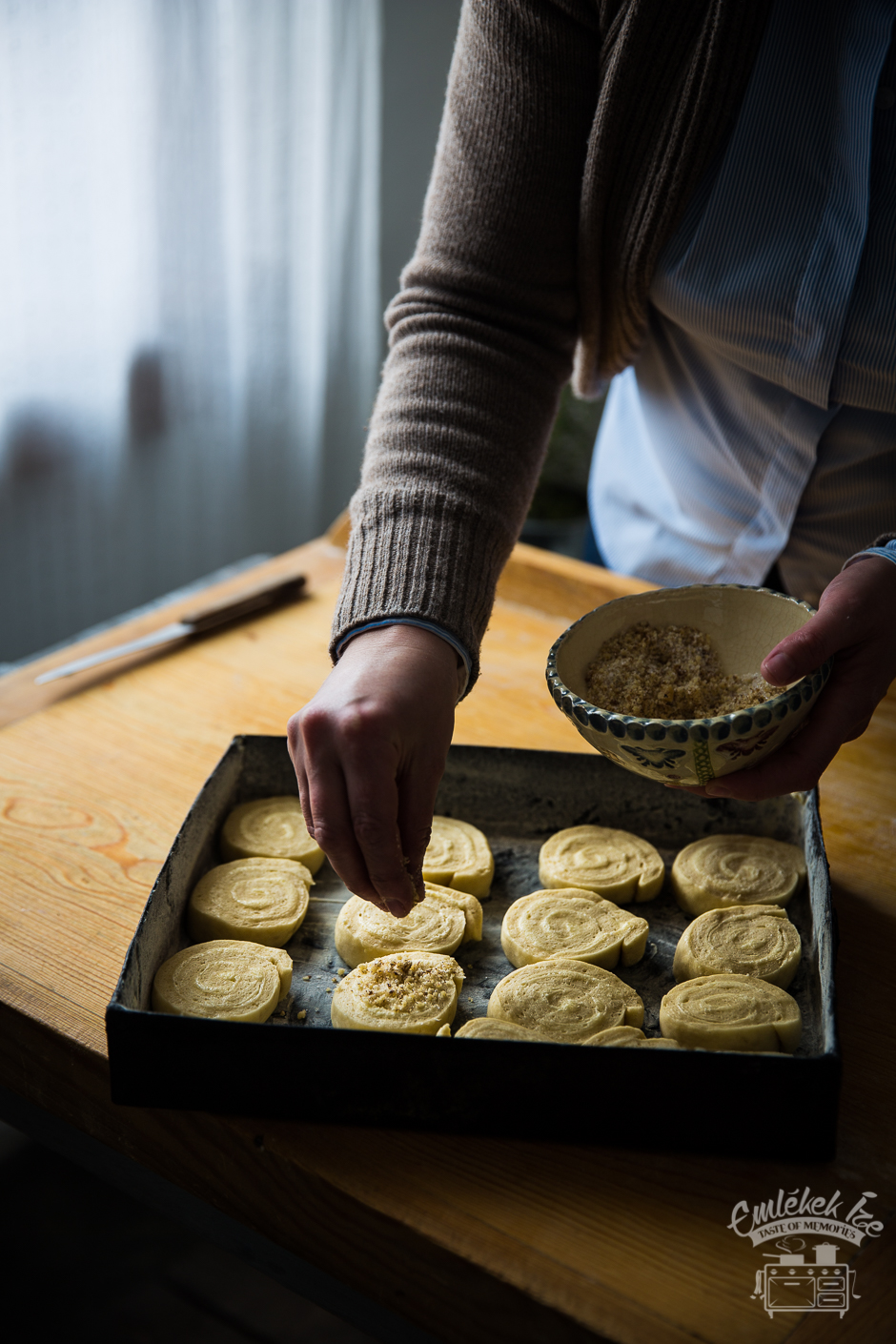 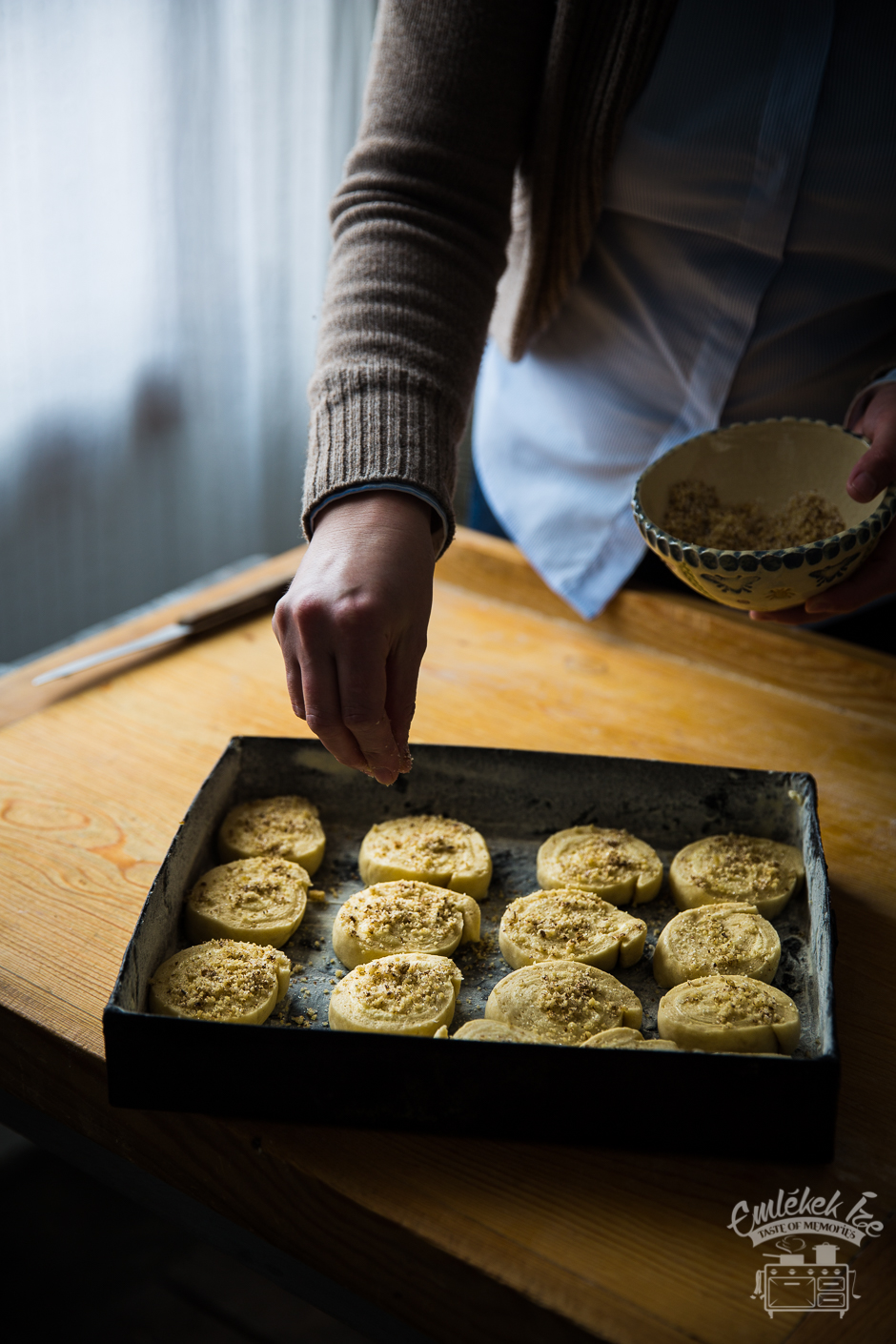 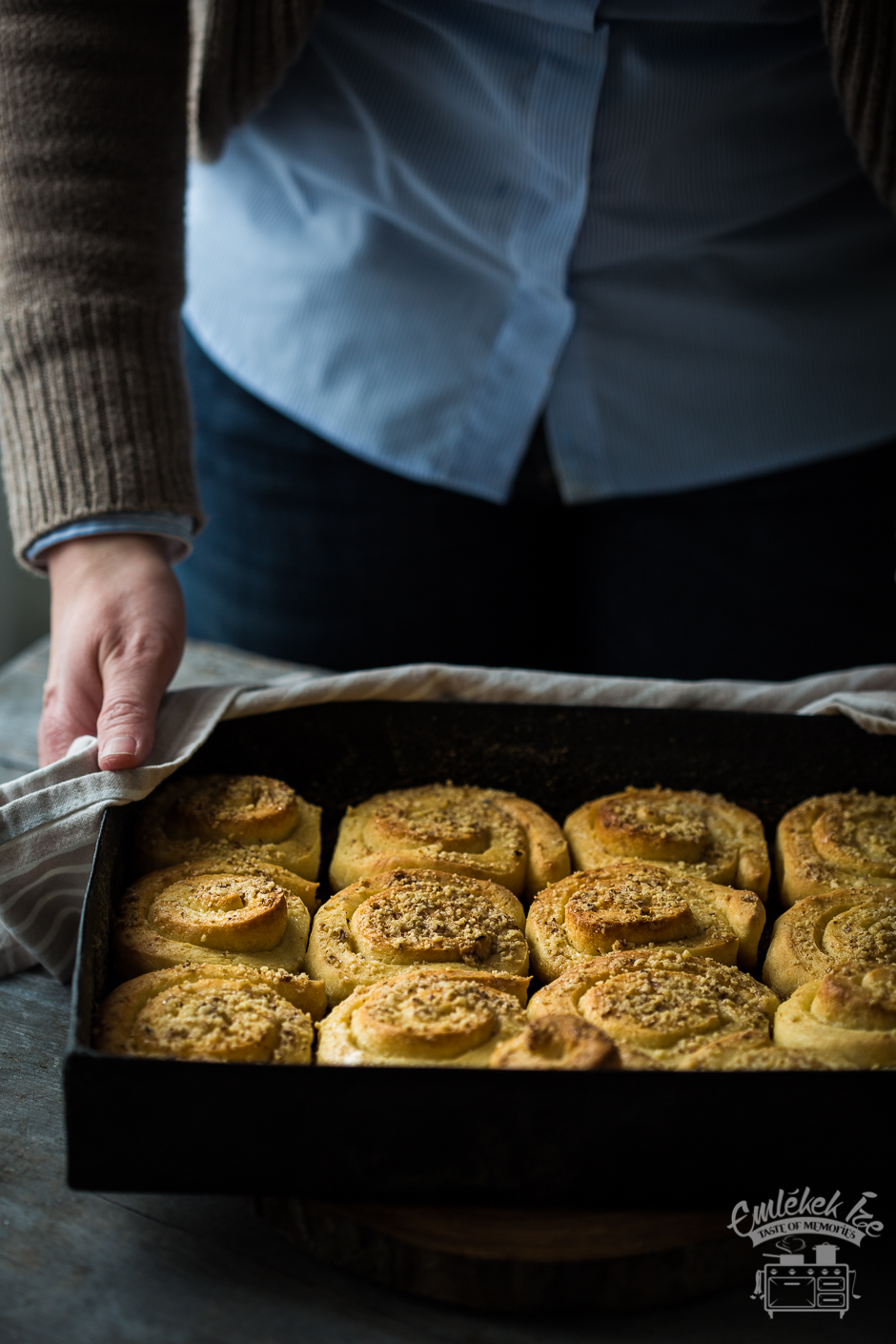 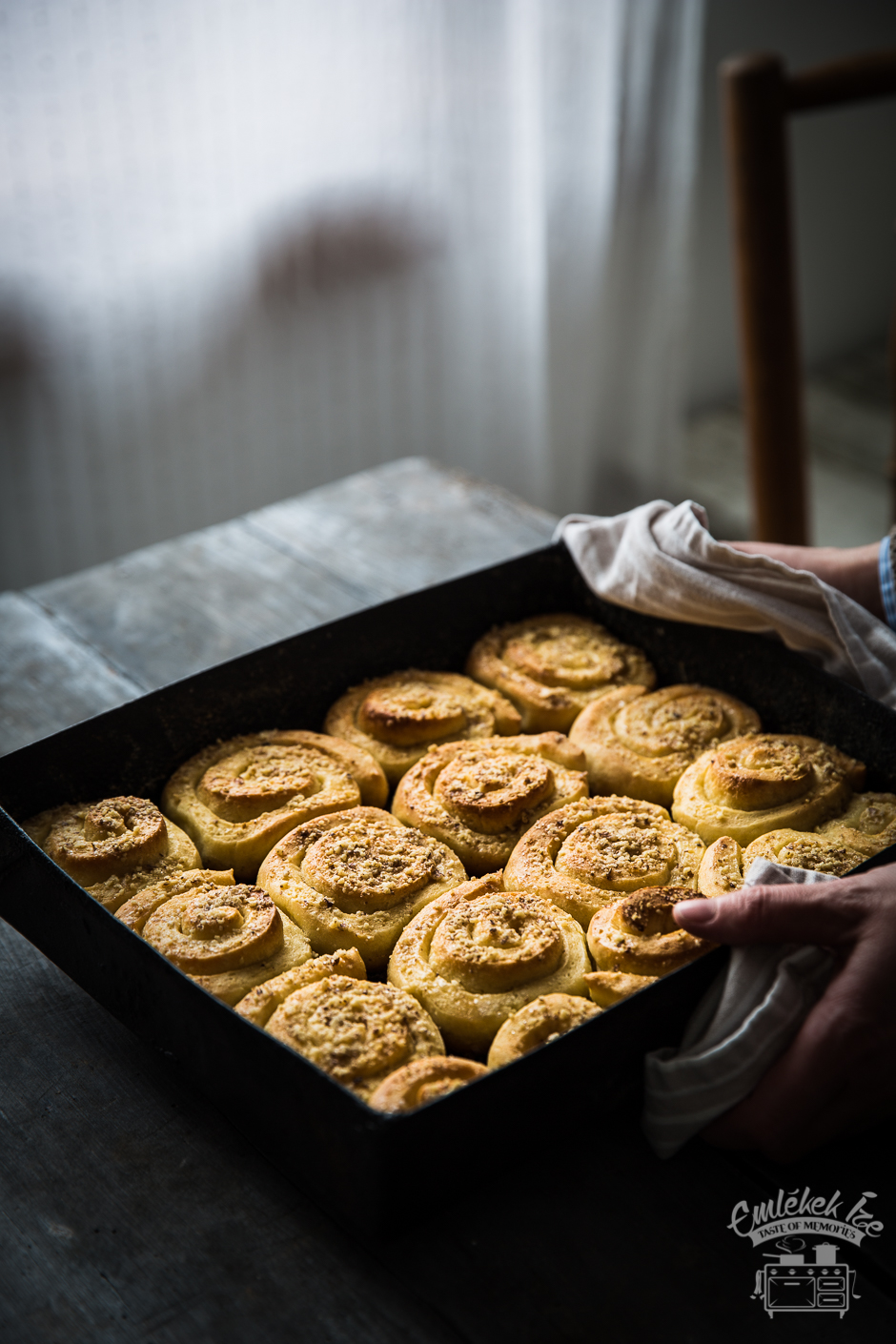 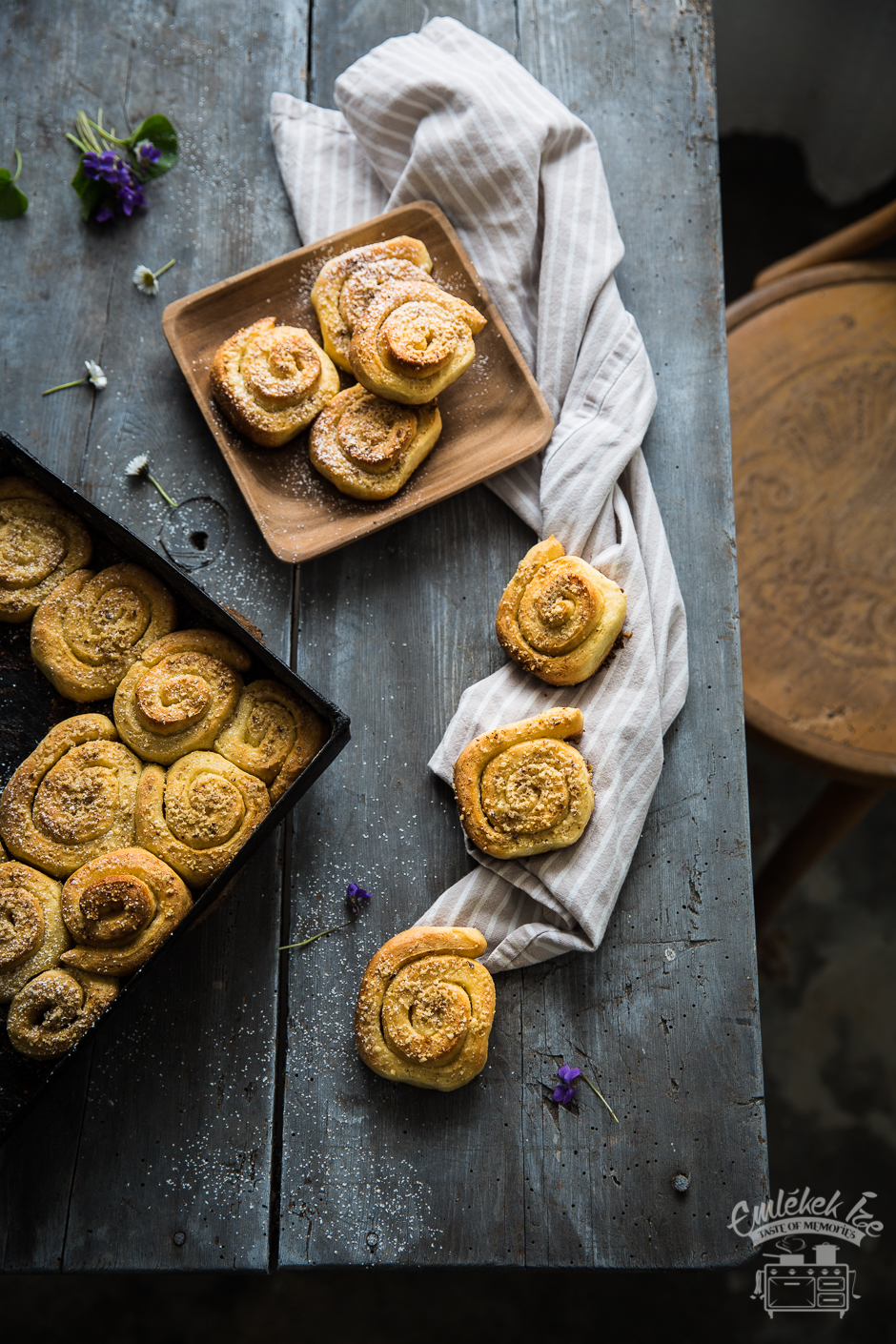 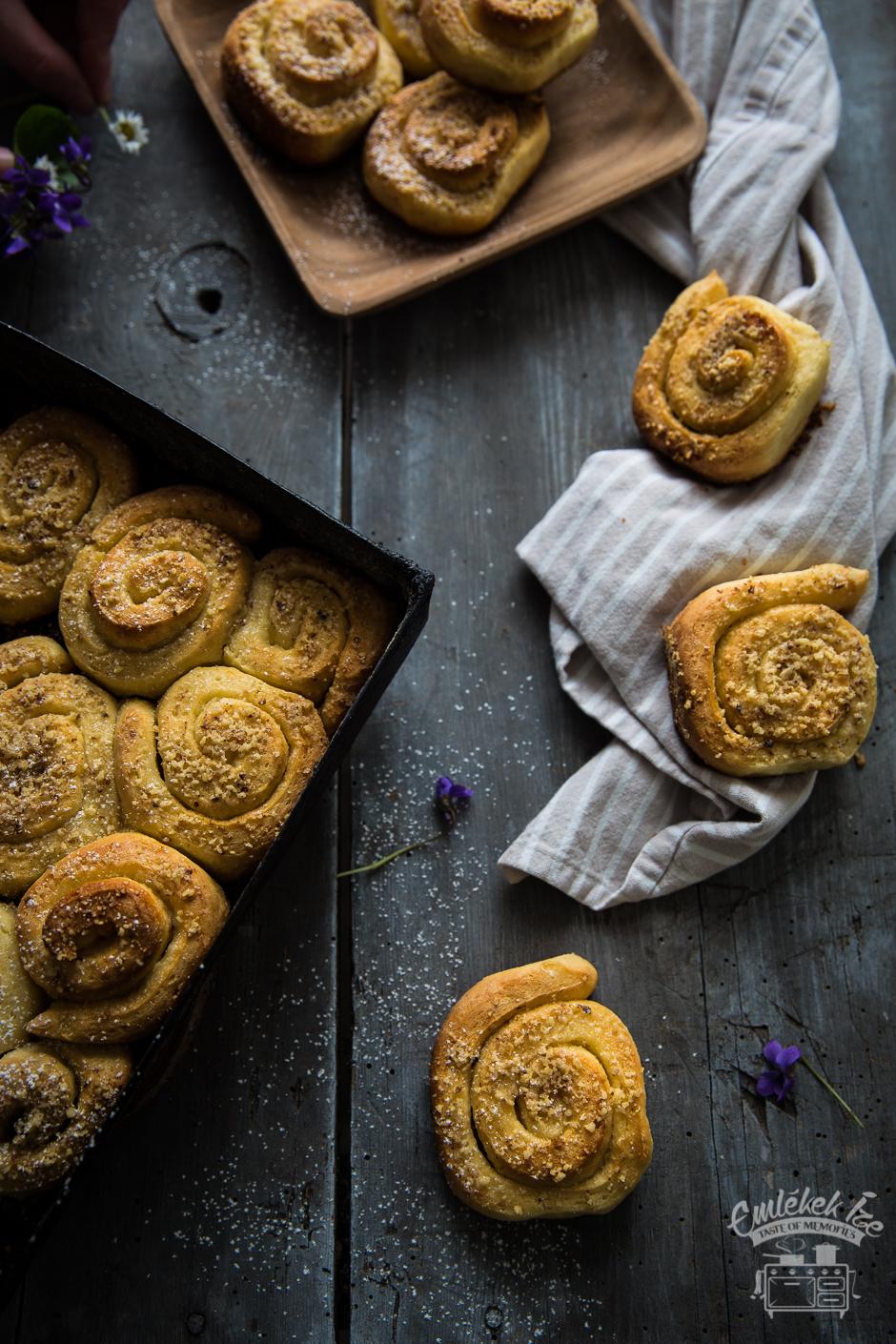 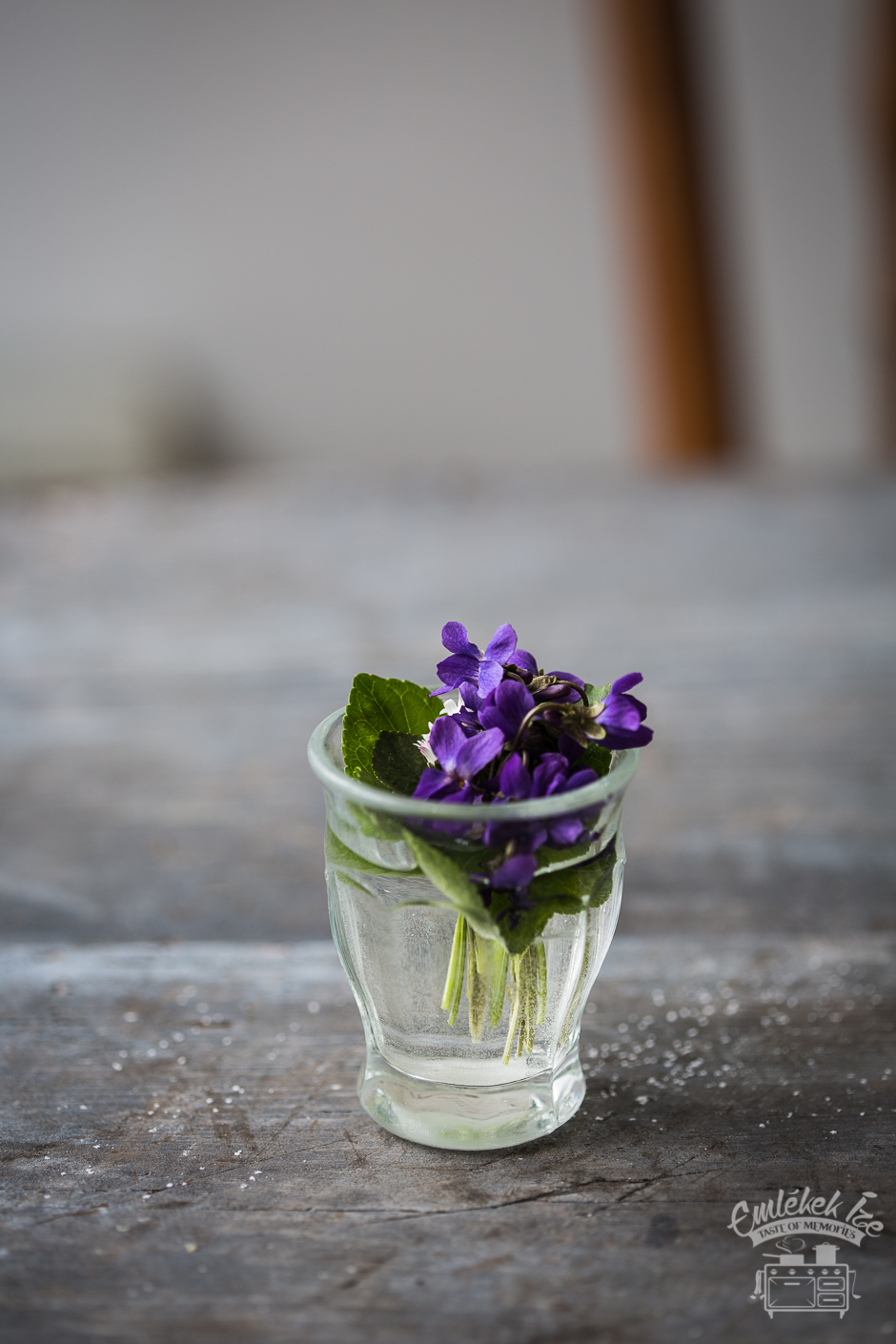