It has been snowing for the last two days, snow covers our blooming fruit trees and the radish and green peas seedlings that just popped up in the kitchen garden. Wind pulls our shutters wildly and we have to start our days again by putting fire in the tile stove. It is quite bizarre in the middle of April. I remember when I was a child- and famous about not being able to get up in the morning- my mother used tricks to get me out of bed. On the 1st April (day of the fools) she told me that it has been snowing during the night and I can go to school by sled. I took it seriously every year and jumped out of bed to get ready for sledging. If I were a child, today it would be a really great and real joke. 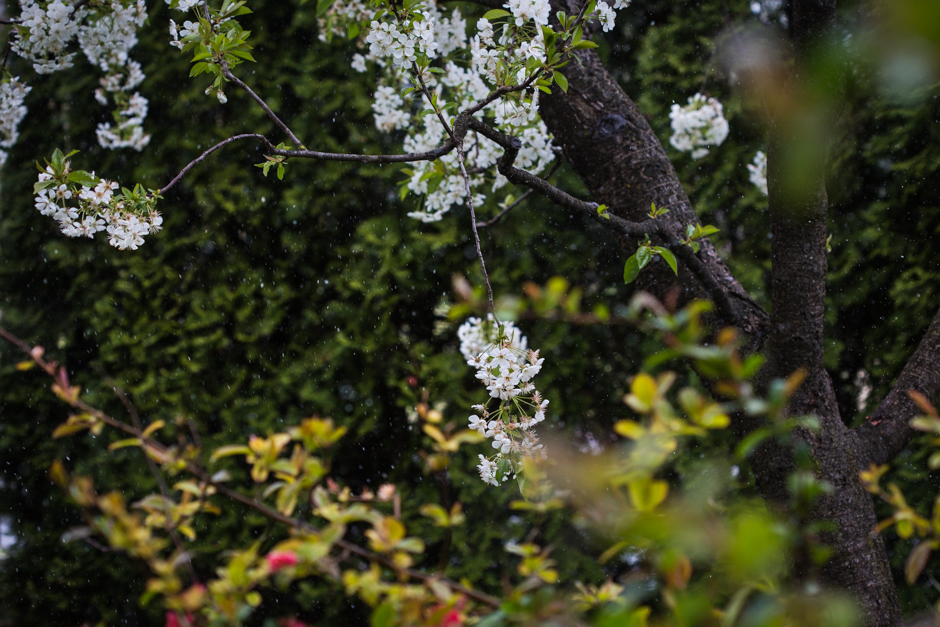 Yesterday I collected the ingredients for today’s blog post, just before everything was covered by snow. I cooked something I never did before. A stew from nettles. My boyfriend’s sister, Adél likes it very much and she talked about it many times. I became curious, especially, because as I told you already we have quite a lot of nettles around our- not perfect but lovely- village garden. I was thinking it could be great to have an ingredient that grows without me doing anything and on top of it it is healthy. My Swabian grandmother liked nettle tea very much, she used it as a medicine for everything. If she didn’t feel well, she had a headache, or she caught a cold or whatever, she had a cup of nettle tea. “I have my nettle tea and I am going to be OK” -she said always, and somehow it worked for her.
In the morning I go out to the garden and to be honest it doesn’t take me too much time to find nettles around. I put on some gloves and pick enough just for a small portion to taste it for the first time. I get some instructions from Erzsi, Áron’s mother and I am ready for the challenge. I only need to find out the right proportions so I can write down everything to share the proper recipe with you. As a side dish I prepare gánica (or as same people call dödölle), or as the Swabians say Krumpensflutte. It is a very nice potato dish which can be a side dish or a main dish as well and for some reasons it got a little bit forgotten in Hungary. It pops into my father’s mind that we could make it for Eastern because it goes also well with pörkölt, our traditional meat stew that we cooked this time from lamb. When I tell him, that I have never made gánica, he says it is very easy, he remembers making it with his mother when he was a child. But as it used to be, he doesn’t remember the exact amounts. I am thumbing through four recipe books, then find it finally in a Swabian one from the region, but the amount of potatoes are missing. I don’t give it up and finally find another recipe in a book from 1954 and use the amount to fill the gaps in the original Swabian recipe. My grandmother used to fry it in a pan but I prefer baking them in the oven. I take advantage from the disadvantage of a gas oven- that it is stronger on the bottom then above- so gánica/krumpensflutte gets crispy very quickly.
Nettle stew is ready, it is time for tasting. “It is delicious”- i say loudly to myself in the empty kitchen and promise to put this dish on our family menu. It is similar to spinach but still different. It has a rich taste and goes well with sunny side up and gánica.
As I am having the soulwarming nettle stew I don’t find the snow in the middle of April so bad any more. But still, I am looking forward to real spring, when nettles can pop up in the garden in unexpected spots. And I won’t mind it at all.

Nettle stew
500 g nettle leaves
120 g butter
4 tbsp olive oil
4 cloves garlic
4 tsp flour
600 ml milk
Gánica/Krumpensflutte:
1000 g potatoes
200 g flour
salt
duck or mangalitsa fat or melted butter
To prepare gánica peel potato, dice and cook it with as much water that covers it. Season it with salt. If potatoes are cooked, mash them together with the water used for cooking. Add flour and extra salt if needed. Combine it gradually than using two spoons form little dumplings and place them on a baking sheet lined with paper. Brush the top with duck fat or any fat you have at home. Preheat oven to 200°C and bake gánica until the bottom is golden brown. Turn them and bake the other side as well.

Put a glove on and remove leaves from stalk. Wash nettles several times. Melt butter in a pan, add olive oil and nettle leaves. Season it with salt, cover the pot and cook it for a couple of minutes. Remove nettles, chop and put them aside. Heat up the remaining oil and butter in the pan, add flour and pressed garlic cloves, stir it until it gets a little light colour then return nettles to the pan, finally add milk and some extra salt if needed. Cook it covered until it thickens. Add some extra milk if you find the consistensy is too thick.
Serve the nettle stew with gánica and sunny side up. 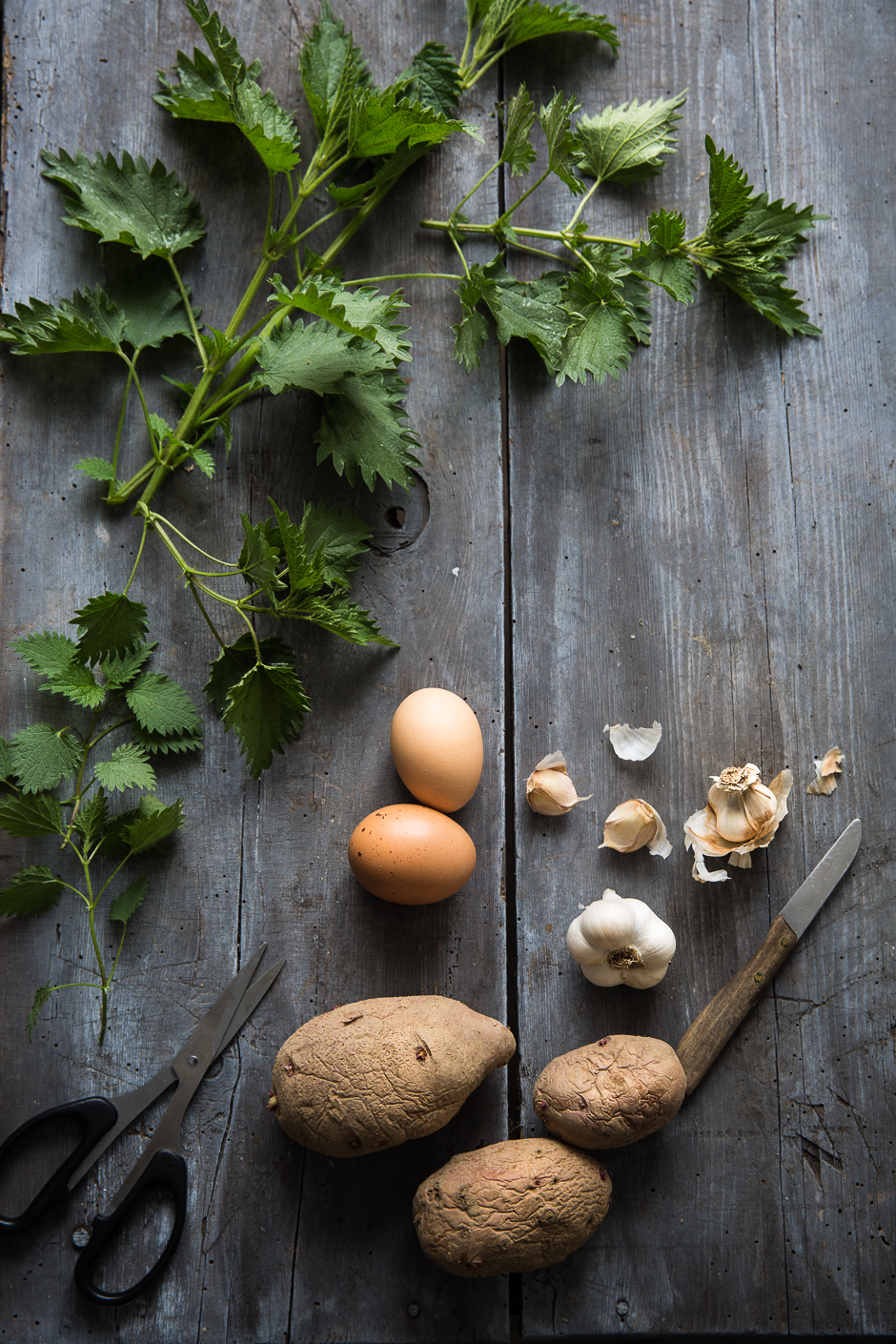 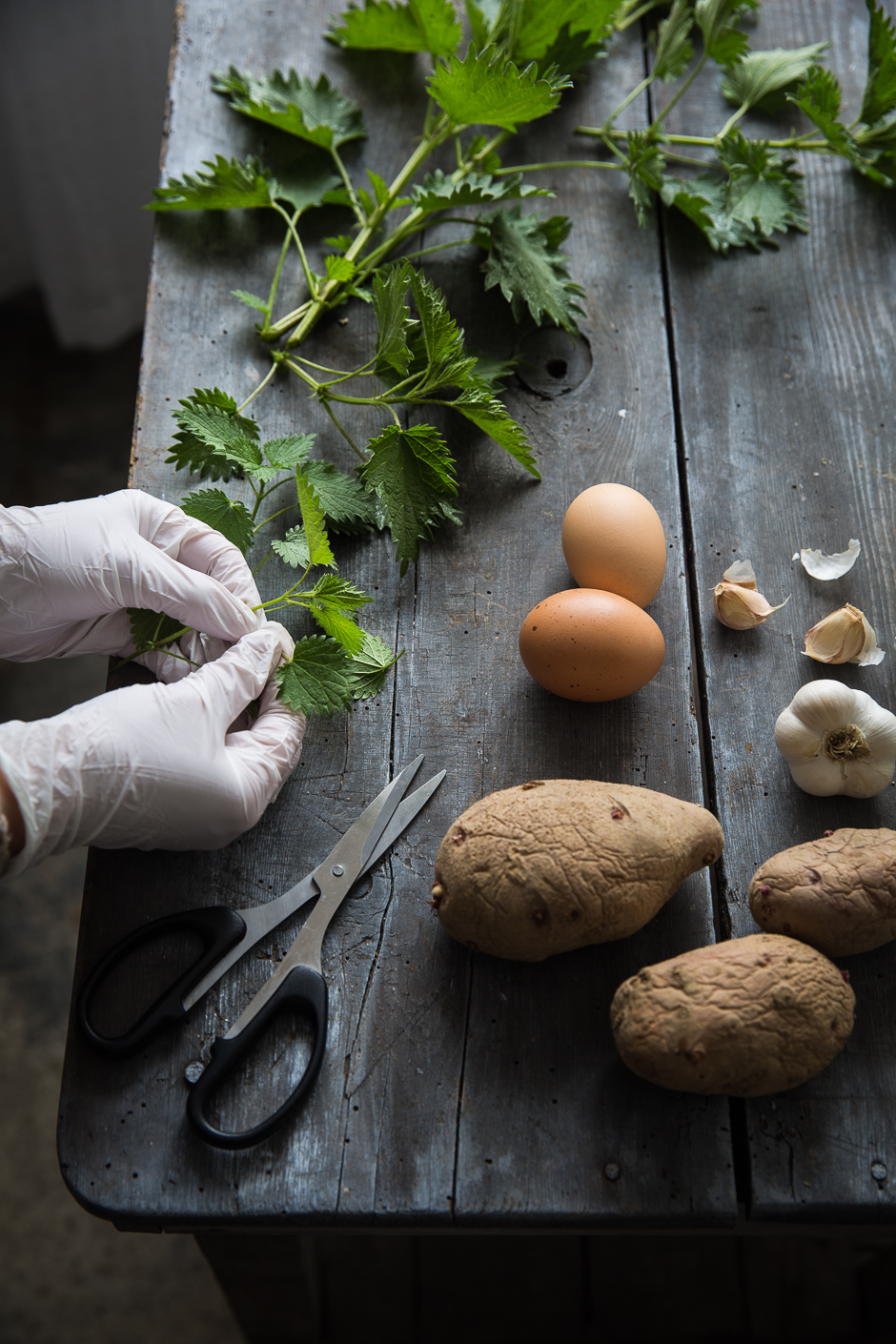 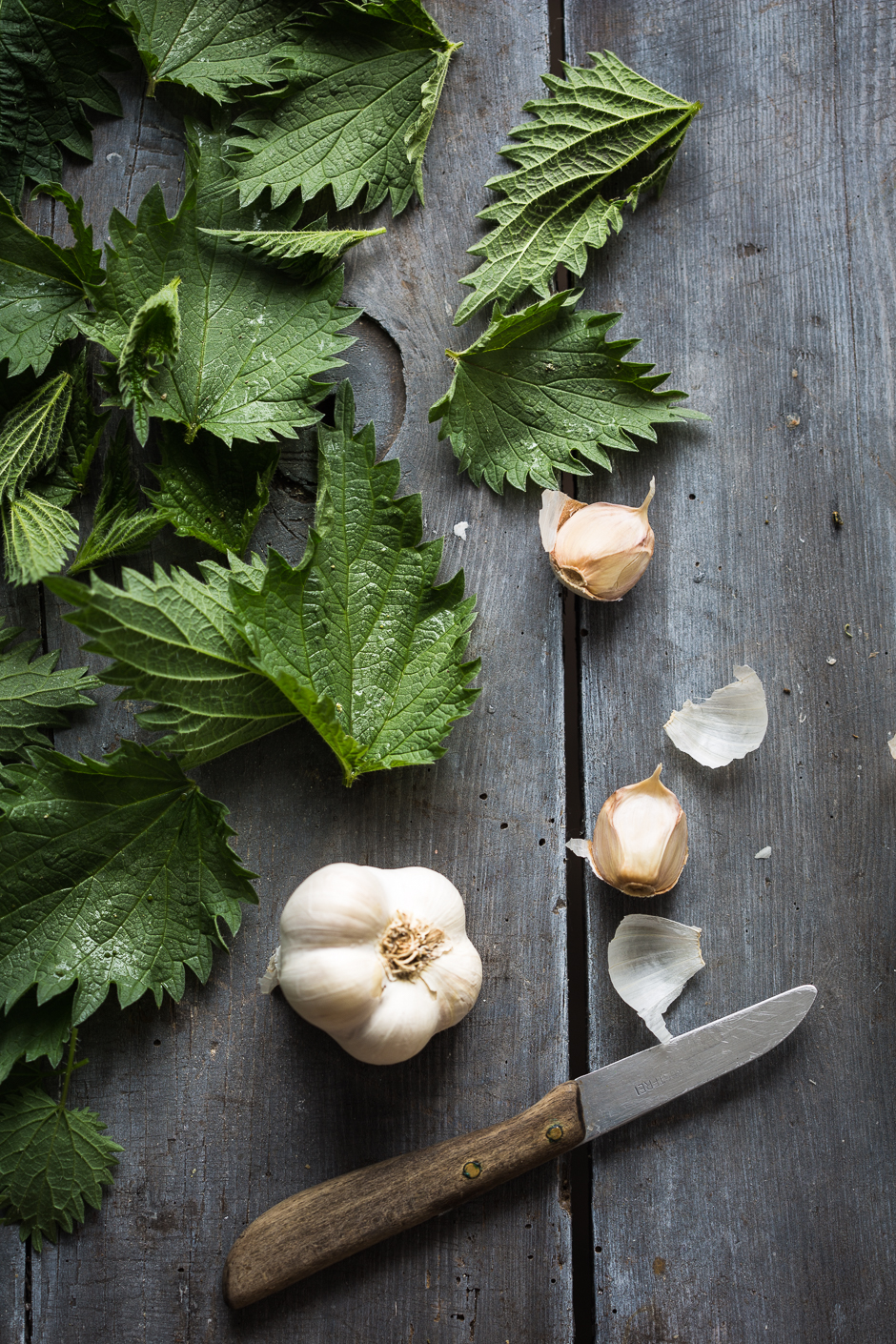 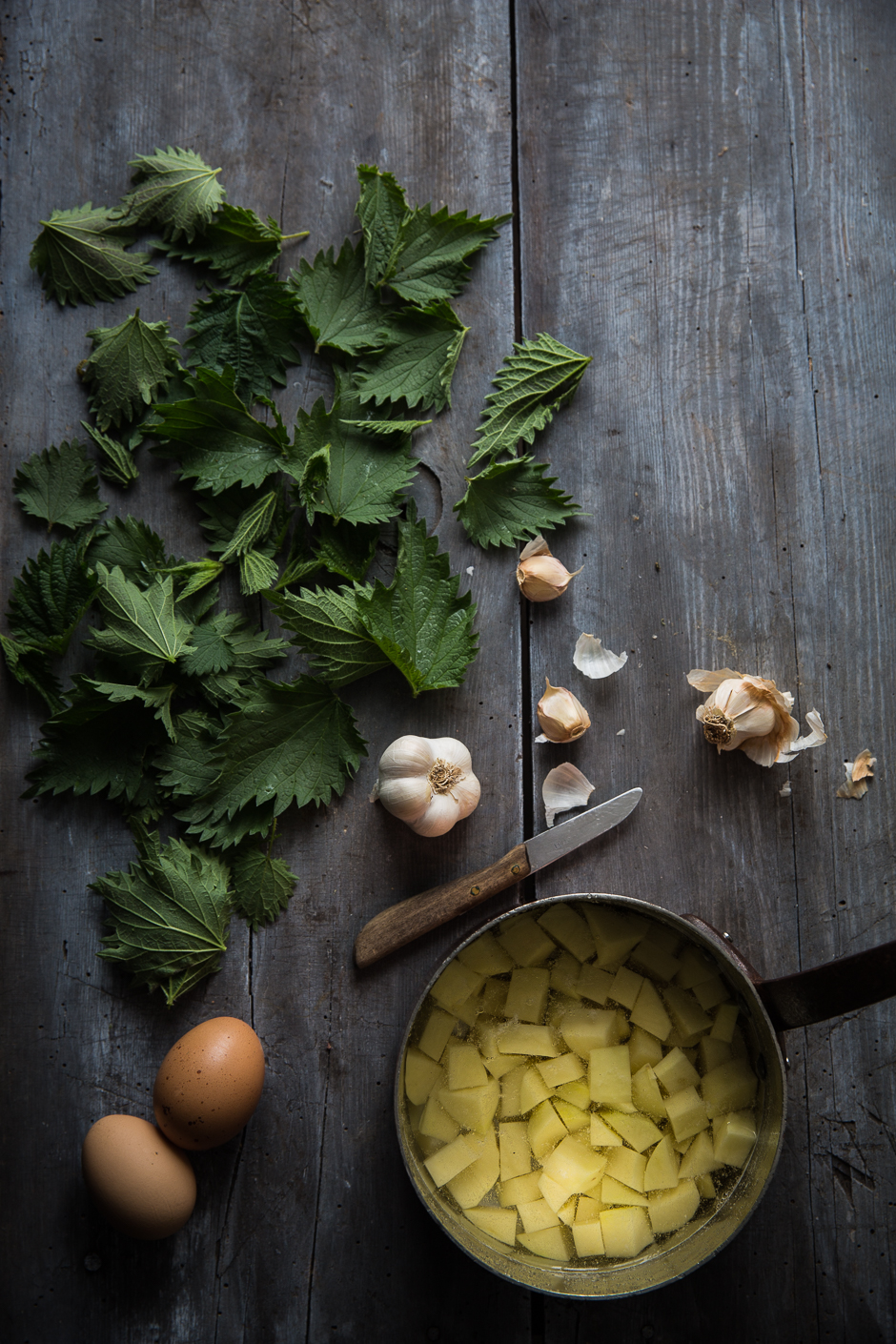 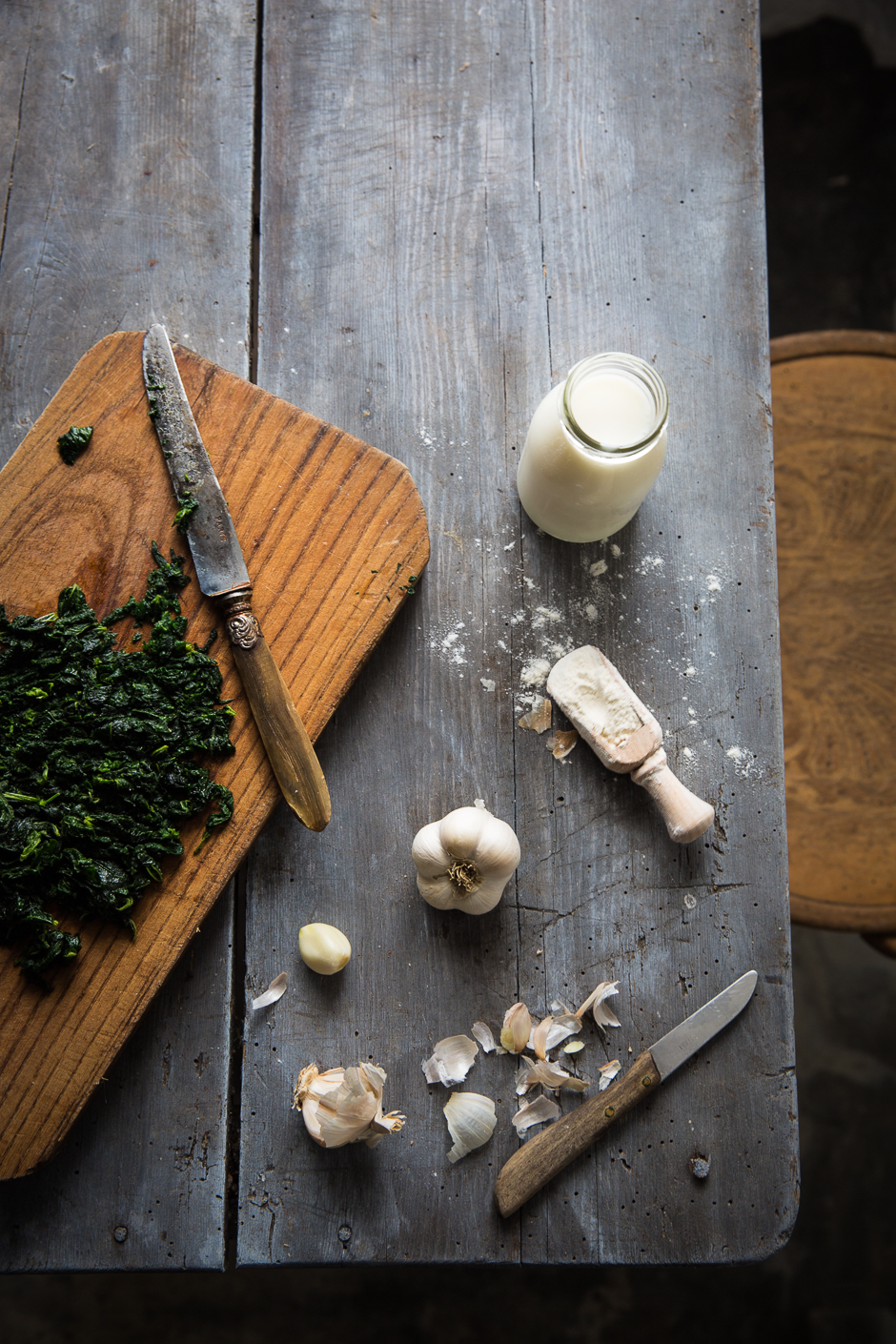 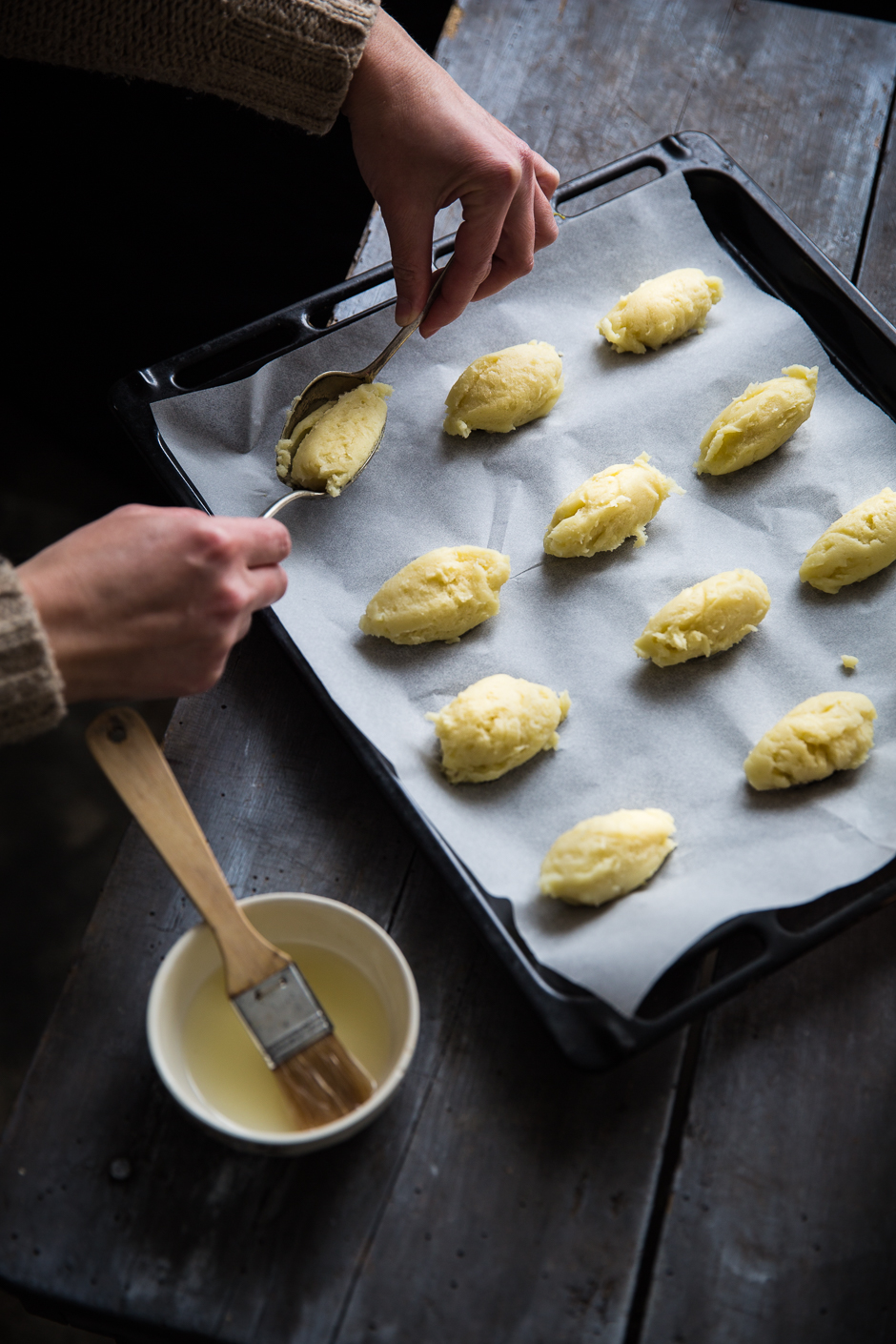 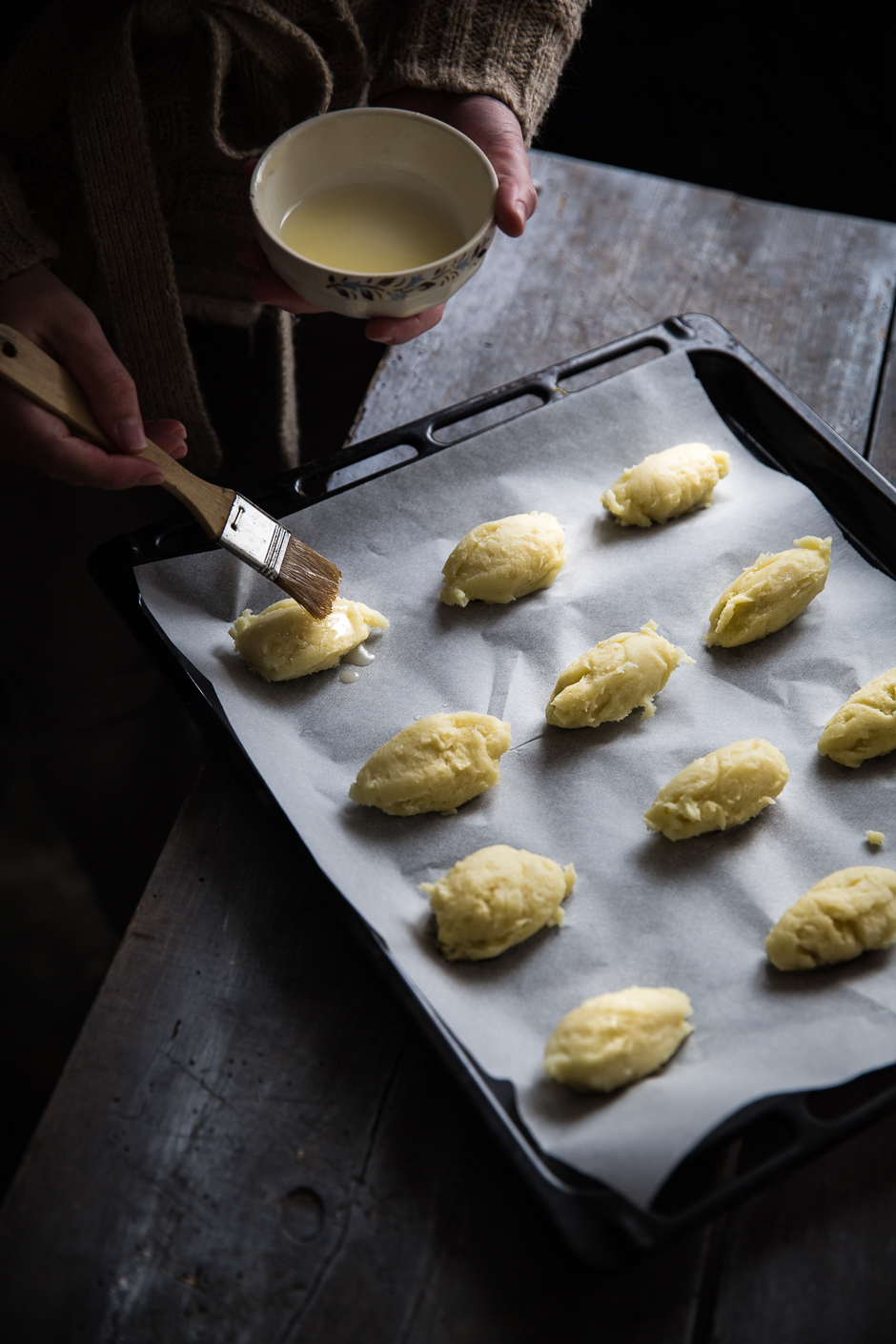 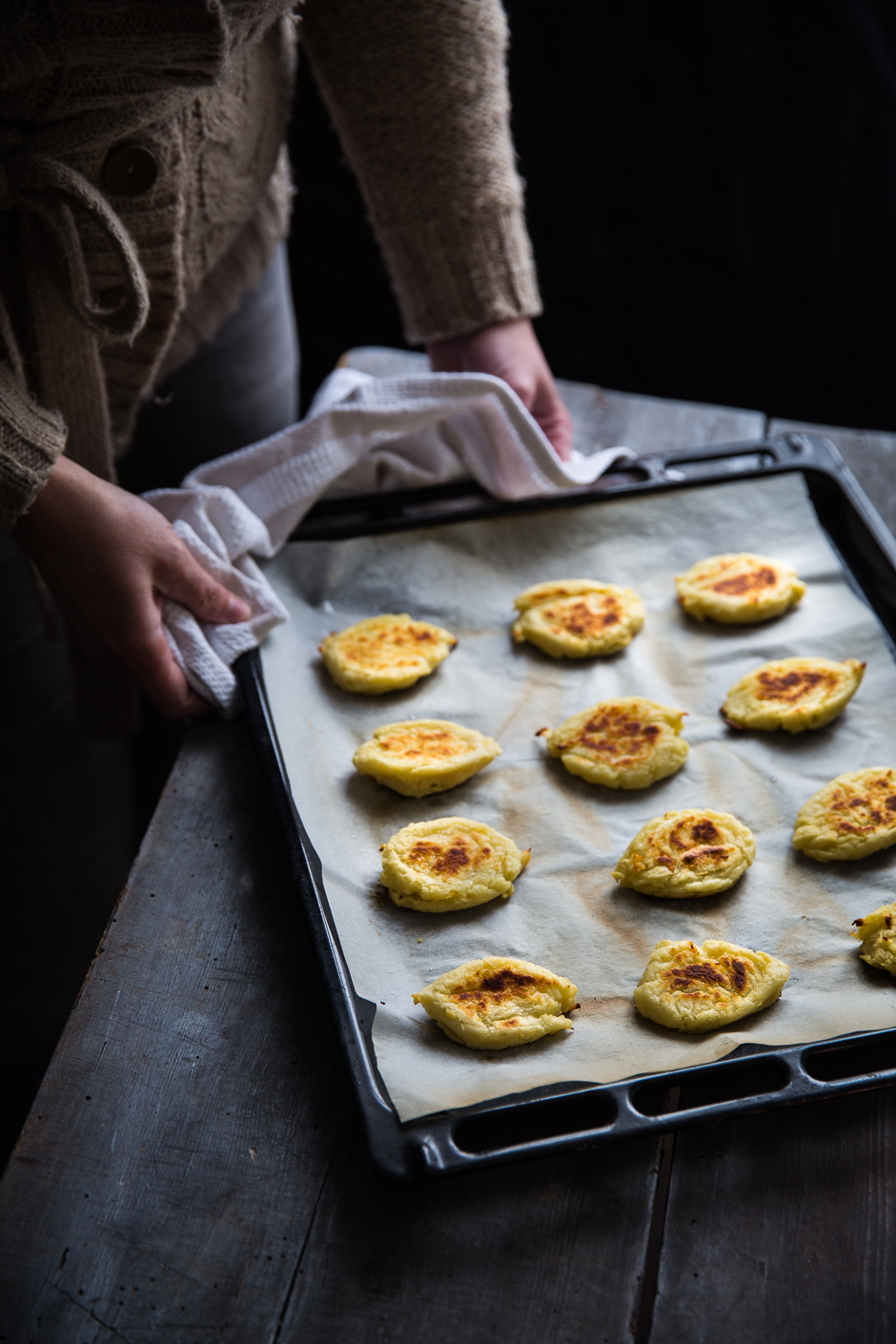 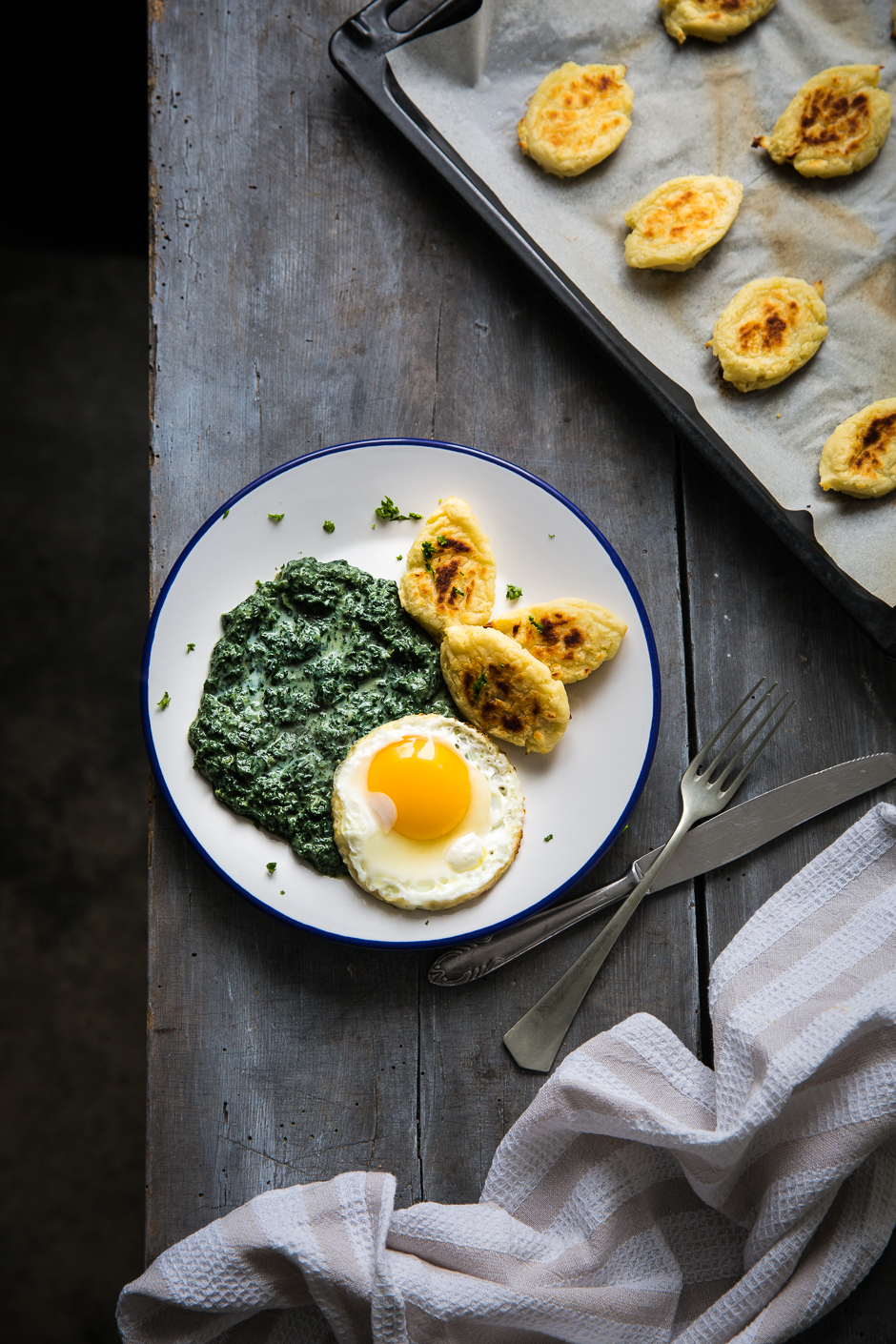 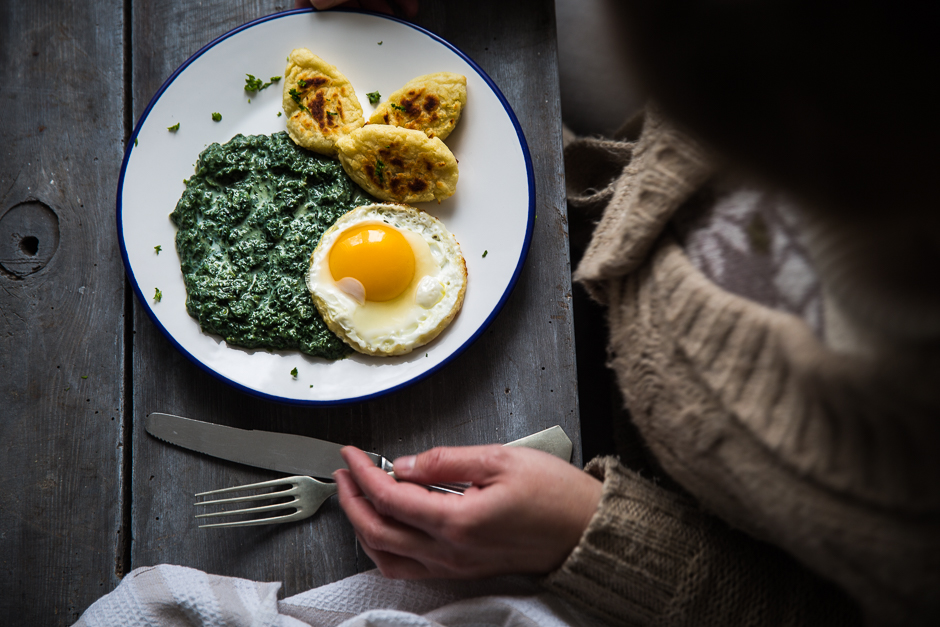 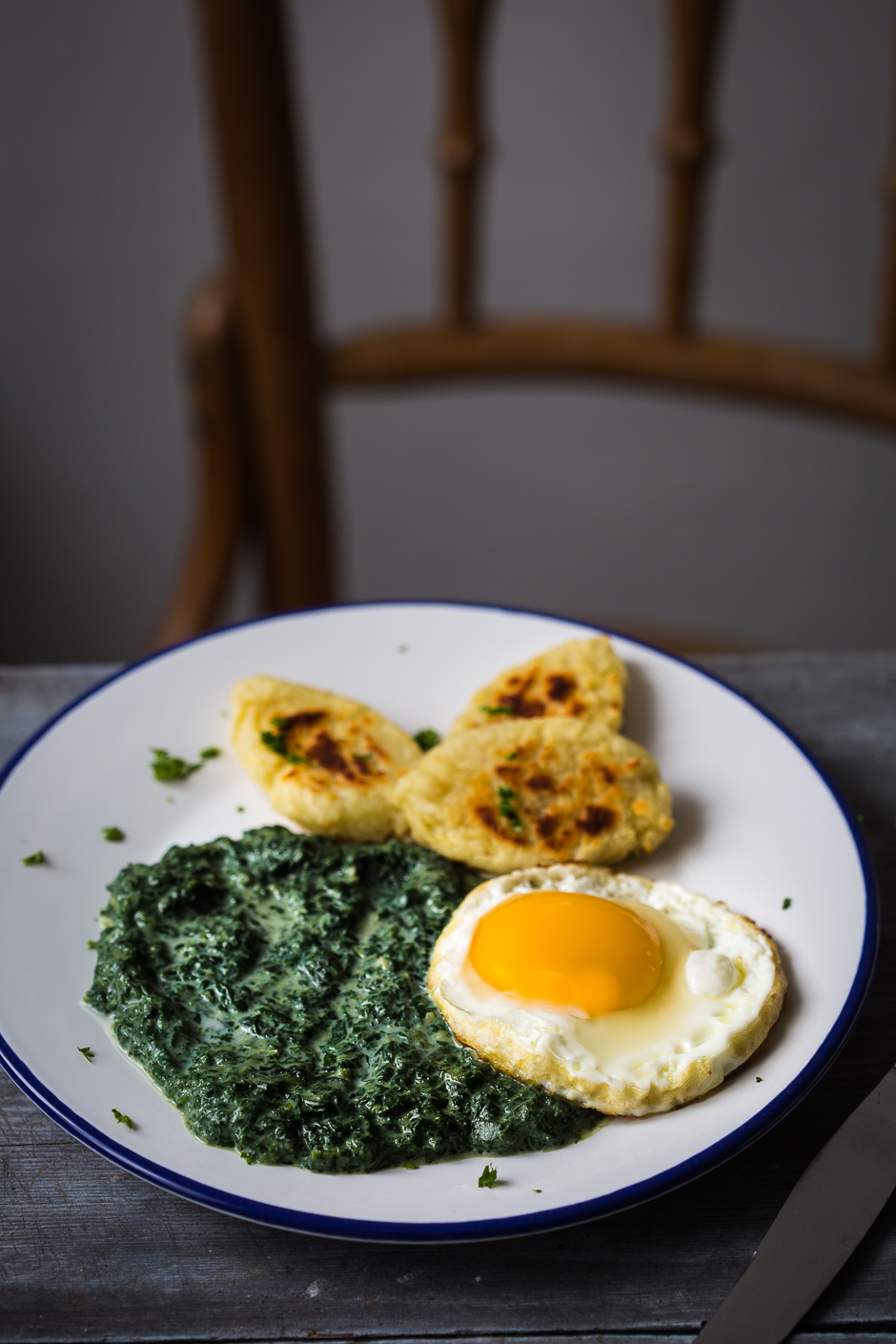 Körözött, cottage cheese cream made in the garden